After almost a century of politically and economically turbulent times, Peru has re-established democratic governance since 2001. In the 1980s, the country was dominated by the terror of the' Shining Path'. In the 1990s it suffered from hyperinflation. And while during the Fujimori era, from 1990, terrorism and the economic crisis were largely eliminated, Peru stood under the dictatorial rule of the president, who was later condemned for numerous human rights violations.

Dealing with this complicated history, Peru‘s transition to democracy started 17 years ago. The constitution of the semi-presidential republic enshrines not only four direct-democratic instruments at the national level, but also two at the local level. At the  Navigator to Direct Democracy symposium on “Political Culture and Active Citizenship” at the Bergische Universität Wuppertal, Arturo Maldonado, professor at the Pontificia Universidad Catolica del Peru, spoke with Democracy International about the use of these instruments at the local level and the current status of democracy in Peru.

What direct-democratic instruments are there on the local level in Peru?

At the local level we have two instruments: One is the recall and the other one is the possibility to make a request. So for example, a group of citizens can collect signatures and write down a number of questions. The mayor then should answer these questions.

Do many people use them?

No, they are not used so much, especially the request is not. We have had only one case of that in Lima, the capital. In contrast, recalls have been massively used in Peru. We have hundreds of cases of recalls on the local level every year.

What role do these instruments play for the democratic development of Peru?

Not a big role, especially not recalls. Because they are not used to activate political participation, but they are used as an instrument for political rivals. Recalls might be understood as a second round of elections: Political rivals who lost the election can collect signatures and ask for new elections. So it is not an instrument of participation, but one of local elites competing against each other.

Your presentation today was titled „Uses and abuses of direct democratic instruments in Peru“. Which abuses have you encountered?

Recalls have been abused, because we have had a lot of recalls of  mayors. So there are thousands of mayors and council members that have been pushed out of office this way. I think it is an abuse, because this mechanism of so-called direct democracy is not living up to the original idea behind it: the leftist parties in the 80s proposed recalls as an instrument to increase participatory democracy. Fujimorismo also proposed mechanisms of direct democracy as a way to increase popular voices. Right now, these ideas are not being fulfilled because of the incorrect use of recalls. That’s why I think it’s an abuse.

But I would also like to emphasize that recalls may be instruments to channel political disputes. In contrast to political actors literally fighting each other, at least they have this institutionalized mechanism to compete. Although these elections after elections lead to instability, at least they are institutionalized. Without recalls it would probably come to violence and crime.

Peru has only re-established democracy in 2001, after several military dictatorships throughout the 20th century and the autogolpe of Fujimori in 1993. How democratic is Peru nowadays in your opinion?

We are a weak democracy, because right now there are some attempts by certain groups through petitions. For instance, there is a petition in congress right now to impeach the president. It is the second petition like that in congress. It leads to instability at the very top of the system! Usually, when the president is impeached, the vice-president should take the seat. But the vice-president has already said that he does not want to. This means that if the impeachment petition succeeds, we will have new elections.

After 2001, Peru has experienced a big economic boom. We have had several decades economic growth, which led to material benefits: a growing  middle class, less poverty, more resources. But this economic boom has not been accompanied by institutional development: There is a gap between economy and politics. The economy is doing well, but politics are weak. This gap is the source of this crisis.

To what extent has your country learned from its bad experiences?

I think we have learned of the bad experiences in economic terms. For example, we are very cautious with regards to inflation. In the 80s, we experienced very severe inflation: In 1989, we had an inflation rate of 5000%! That’s like in Venezuela right now. So that mobilized people against economic instability.

What would be necessary to improve the democracy, so that there could be a better perspective in the future?

But from the top down, Peru needs to learn that politics are more than political dispute. They have to invest time, they have to invest effort – not only to maintain the economy, but also to develop institutions in Peru. That is from my point of view the patent recipe in the case of Peru. To develop some kind of civic culture from the bottom and strong institutions from the top.

The Navigator to Direct Democracy informs about the legal designs in Peru: www.direct-democracy-navigator.org/countries/peru/regional

More from the Political Culture and Active Citizenship Symposium 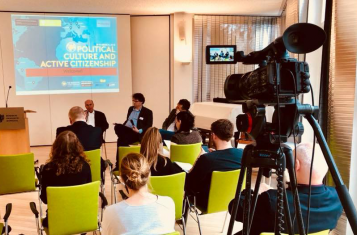 For seven years, Dr Klaus Hofmann has been researching legal instruments of direct democracy worldwide for the Navigator for Direct Democracy....
Mehr
Learn about direct democracy in the world.... 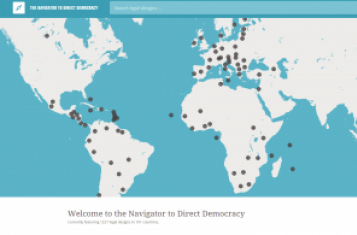