Democracy International hosted a press briefing at the European Parliament today to launch an alliance of organisations from all over Europe under the banner ‘Democratic Europe Now’. Together, the group is calling for a new EU Convention under Article 48 of the Lisbon Treaty, so that proposals for democratic and other reform can be debated in an open forum.

A number of MEPs and commentators, representing political parties and perspectives from across the political spectrum, offered their public support for the campaign and for the goal of a more democratic Europe.

A crisis of democracy

Democracy International’s Chairperson, Gerald Häfner, said that citizens don’t want a Europe in which the most powerful governments and financial markets have more influence than the citizens themselves: “Instead of decisions taken by the heads of states behind closed doors, we need an open discourse on the future of Europe and European democracy – and a real democratic European Union of and for the citizens.”

Democracy International says that the gap between the EU institutions and the citizens must be reduced, and that citizens and civil society must have a real influence on European debates. “The EU is suffering a crisis of legitimacy that must be addressed. We must have a Convention. We need to bring the big issues out of the back rooms of the EU and open up the debate on the future of Europe”, said Häfner.

‘Democratic Europe Now’ demands a meaningful Convention process - one that is democratic, participatory and transparent and which gives the citizens the chance to vote on the outcome.

The group made an intervention in front of the European Parliament in Brussels today to draw attention to the need for democratic reform. With a playful and whimsical approach they transformed the square in front of the European Parliament with a string quartet and red carpets unrolling in every direction. The group’s message was delivered to onlookers along with hors d’oeuvres:

But without the people, Europe cannot succeed. 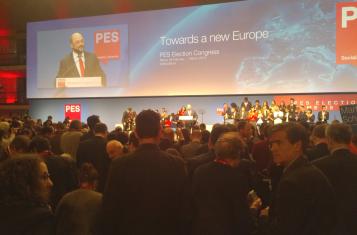 The President of the Party of European Socialists (PES) Hannes Swoboda had invited Sophie von Hatzfeldt and Daniel Lentfer, both working for...
Mehr