On Friday, 9 October 2015, the Dutch democracy organisation Meer Democratie together with foodwatch Netherlands, Milieudefensie (Friends of the Earth) and the Transnational Institute kicked-off a campaign for a referendum on the Transatlantic Trade and Investment Partnership (TTIP) and Comprehensive Economic and Trade Agreement (CETA). People can sign a referendum petition. As of 19 November 2015, more than 40,000 signatures were collected already.

The launch happened one day before European-wide demonstrations against these free trade agreements took take place.

On 10 October, people marched on the streets of Europe's capitals. In Berlin alone, 250.000 people demonstrated against TTIP and CETA. Democracy International's German partner organisation Mehr Demokratie was involved in organising the protests in Germany's capital.

The strategy of the referendum campaign in the Netherlands runs as follows: Citizens are to endorse a petition now to express their opposition to TTIP and to ask for a referendum. A real referendum can only be held later once the Dutch parliament has signed the international free trade agreements.Those people who supported the petition will be asked to sign the referendum also, while the petition also is to put pressure on the Dutch government. In case only the EU institutions have to ratifiy TTIP and CETA, a citizen-initiated referendum will not be possible, while the parliament could still hold one.

The campaigners apply this approach as they can make use of the Dutch “facultative” referendum law. This instrument of direct democracy came into effect on 1st July 2015 after intense advocacy work by Meer Democratie. 300 000 Dutch citizens can trigger a referendum on a law that both chambers of the Dutch parliament have passed.

Although very young in existence, the facultative referendum already has been applied in practice: Nine days after the referendum law went into effect, the Dutch senate ratified the association treaty between the EU and Ukraine. A EU-critical citizen group together with the blog GeenStijl gatheredaround 500.000 signatures, mostly online. Officially this way of collecting signatures was not allowed, but GeenStijl managed to build an app through wich people can ‘draw’ their signature online, which is legally valid to a ‘wet’ signature. The government has stated they will accept these signatures.

Everybody can sign the petition on TTIP via www.ttip-referendum.nl

Meer Democratie is a national partner organisation of Democracy International.

- on the campaign against TTIP in the Netherlands

- on the Dutch facultative referendum law 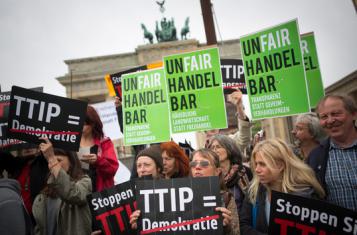 The Transatlantic Trade and Investment Partnership (TTIP) currently being negotiated between the EU and the US is proclaimed to offer promising...
read more
„Stop TTIP“ running 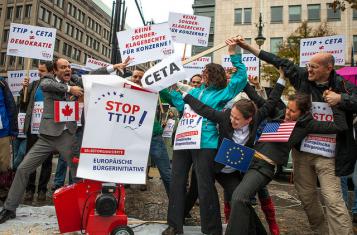 On Saturday, 11 October 2014, thousands of people throughout Europe protested against the European Union’s plans to conclude the Transatlantic Trade...
read more
"I will present an alternative to TTIP" 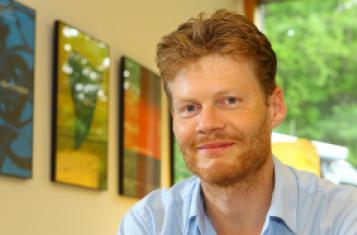