The Transatlantic Trade and Investment Partnership (TTIP) currently being negotiated between the EU and the US is proclaimed to offer promising prospects for economic growth and employment in Europe, a dire need in a continent challenged by a prolonged economic crisis. Removing trade barriers, simplifying bureaucratic processes, and encouraging investments are to help drive new jobs, boost innovation and to forge a geostrategic deal between the US and EU. Barosso announced at the launch of the TTIP negotiations in mid 2013: ‘We intend to move forward fast’. And in fact the eighth round of negotiations have just started this week. However, does Barosso’s statement imply waving through the agreement before having a serious democratic discussion, and before having a meaningful engagement with all stakeholders?

A commentary by Democracy International

Many European citizens heavily criticise the trade talks regarding the content and the process, and a wide array of civil society groups (including environmental, consumer and labour groups) are protesting that their voices are not heard in the negotiation process. A common concern is the threat that the major trade and investment package poses on our democracy.

One contented issue which faces great public resistance is the Investor-State Dispute Settlement (ISDS) mechanism, by which foreign companies can sue entire governments for alleged “loss in fu-ture profits”. Including ISDS in the trade deal would jeopardise our democracy by limiting the sov-ereign right of parliaments to make legislation, curbing the ability of policy-makers to adapt measures to come out of the crisis, and severely burdening public budgets - taxpayer funds which ought to go into education and public health. To counterbalance ISDS, governments and citizens would have to be granted comparable rights to hold corporations accountable and sue them for “burdens on future generations”!

The process of the trade deal has thus far been highly intransparent and undemocratic. The European Commission is the only EU actor at the negotiating table, and the European Parliament - the only EU institution that is democratically elected and directly accountable to the citizens - has only the meagre right of accepting or rejecting the full trade package at the end. The Commission demands a high degree of confidentiality in the trade talks, leaving almost entirely devoid any democratic control and democratic debate. 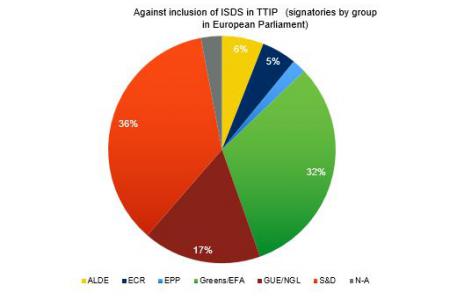 Given the immense impact of TTIP, and in face of the hitherto major public resistance, the TTIP negotiations urgently require involvement of citizens. Concerns expressed by various stakeholders must be actively addressed in the agreement. Greater transparency and democratic participation can be achieved through intensified interaction with the existent TTIP Advisory Group, regular consultations with civil society groups, and innovative practices to proactively engage with citizens and civil society. The European Citizens’ Initiative against TTIP has been rejected, however the concerns of millions of citizens must nonetheless be taken seriously. 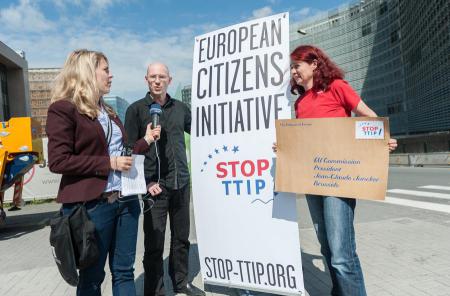 It seems as though the new College of Commissioners welcomes greater transparency in the TTIP negotiation process, having made more documents accessible to the Parliament and recently staging a public consultation on the contentious ISDS. The consultation was very successful in that it received 150,000 reactions from citizens and organisations (mostly from the UK, Germany and Aus-tria), and resulted in a temporary removal of ISDS from negotiations due to strong public opposition. Now it remains to see whether these voices will really be taken seriously. Removing ISDS from the negotiations for the time being does not solve the problem but merely postpones the decision to a later stage.

- Press Release by the European Commission on TTIP Advisory Group