Matt Qvortrup is Professor of Political Science at the University of Coventry and an expert on referendums. In his new book, The Referendum and Other Essays on Constitutional Politics, he looks at the historical development of referendums and how they are used around the world. We spoke with him on the future of citizen participation in the United Kingdom after Brexit.

What is the status of the referendum as an instrument in the UK, after Brexit?

The status of it is, if I can quote Theresa May, “Nothing has changed.” Technically, if there were to be more treaty changes on the EU level, there would have to be more referendums. Under David Cameron, this constitutional mechanism was introduced, but it is now almost obsolete as we stand to leave Europe. But generally, it is up to the government to decide whether they want to transfer sovereignty, which is problematic.

In this country, all referendums are decided by the government. There was a man, Professor Samuel Finer, who said that in Britain, the government can choose its own executioner and the time of execution. The problem is that you decide whether you want to be checked, really.

if I could choose one law, I think we should have an Italian-style referendum where we can demand a referendum on an existing law: Il referendo abrogativo. I always refer to the example of Berlusconi passing that law that meant the Prime Minister could not be put on trial. Once that law had been passed, the people said enough is enough - “basta, non piu.” The parliament did not vote for no-confidence, but the people at large did.

In your book, you look at the historical development of referendums. In the UK, there have been several referendums and plebiscites. Have they changed over time? Are there any trends you can see?

Sadly, not really. We have only had three nation-wide referendums and all of them were party-political. What is interesting under the present circumstances, is that in 1979 there was a referendum on whether there should be a devolved parliament in Scotland. Originally, the government did not want to, but a lot of Members of Parliament considered this a constitutional change and said we needed to have a referendum. So first the government was forced to concede a referendum on that particular bill and then later they were forced to concede that the proposition had to be supported by 40% of the eligible voters.

That spirit of 1979 could well come back, possibly even soon. Theresa May has said that Parliament cannot force a referendum. Well actually, Parliament has forced a referendum in the past, and forced it upon a government that did not want it. The advantage of not having a constitution is that the rules become rather flexible.

We have also had a fundamental change. We now have the Political Parties, Elections and Referendums Act, that stipulates how to regulate referendum campaigns. Much as one can be sceptical of the British system of referendums, one thing we do have is a completely level playing field. Both sides will be given public money, there are limits on how much money they can spend, and there is a statutory period. It would take at least six months to have a referendum, so we cannot do what they did in Greece or Slovenia.  We do have rules that are quite sensible. It’s just the initiation of the referendum that is at the behest of the government and I think that the people should decide when they want to have a check.

Do you think that there is any chance of such a citizens’ initiative system being put in place in the United Kingdom?

I think historically most changes have actually come about because of political opportunism, so I think it could happen sort of by default. Things can often happen in a way that is not intended, because politicians do not really think about what they do. I would not say it is out of the question, but it is not something a lot of people are campaigning for.

David Cameron actually wanted the citizens’ initiative at the local level originally. I remember having a discussion with him, in Brussels of all places. Then when he got in, he decided not to go through with it. British politics is very much about opportunism, as they are elsewhere, I suppose. But here they are opportunistic without a constitution.

This is of course what we also saw in Austria, where both ruling parties had committed to direct democracy in their election campaigns, but then left it out of the coalition agreement.

Yes, but if you take for example Italy - Article 75 of the Constitution was only supposed to deal with divorce. But once they introduced it, it got out of control. So I think the best way to introduce the initiative, is to sneak it in somehow. Without too much fanfare.

This was the problem in the Netherlands: it took a long time to introduce it and when it was introduced, it was used in a different way than expected. So they decided not to have the referendum anymore. I would not actually have thought that it would have been possible for the Dutch to do that, because I thought D66 would oppose it. But they sort of got away with it without being punished.

The message there really seemed to be that the people voted ‘wrongly’ in the referendum on the EU-Ukraine Association Treaty, and so the new government decided to abolish the referendum.

Yes, I can see the Ukraine referendum being an odd one, but it was also a case of people voting by proxy. But then, we had the dragnet charter - the surveillance law - which was blatantly un-Dutch. The Netherlands basically invented Human Rights and then you do something which undermines these fundamentally Dutch values, so the people voted against it of course. In some way this was a model referendum. People need a veto when their rights are being stamped upon. It was by all accounts a fair and open debate and the government pretty much realised that they were out of control there. So my favourite referendum was the last Dutch referendum, and then they abolished it right after that. 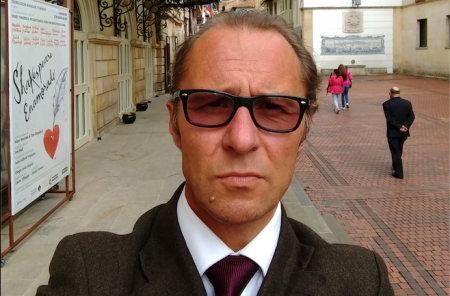 This also shows that with practice, people start to appreciate direct democracy instruments more and use them in a better way, without voting by proxy as you called it.

Yes, I was made famous for a week when Tony Blair introduced the citizens’ proposal. This means you can petition something, and the Parliament has to debate it, which is ludicrous. It happened to be a week where I had published a paper calling for the citizens’ legislative initiative. And when I was writing, I found a line by Margaret Thatcher’s education minister, who is somebody I normally completely disagree with, Keith Joseph. He said, “If you give responsibility to people, they become responsible. If you take responsibility away from them, they become irresponsible.” And that has sort of been my strapline on referendums ever since. The best way to teach democracy is to practice it. It is like playing tennis. You get better at playing tennis when you play a lot and you get better at democracy when you practice a lot.

The Guardian published an article recently, basically saying populism is terrible. Some populism, such as the Steve Bannon kind, certainly is, but there is also this other kind, like some of the left-wing populism we see in Latin America. Actually, many of these mechanisms lead to more equality. Because voters get fed up with inequality and then they demand things. In my book, there is a chapter where I show that wherever you have opportunities for direct democracy, you also tend to have lower budget deficits. Because people tend to only spend money on what they like. Those are not radical, crazy, democracy-run-amuck kind of situations. That is just moderate common-sense, I think.

In your book, you look at how referendums are organised in different jurisdictions. Looking at the models that are out there, what would you consider a good model?

I would think Uruguay is a good example, it has the Italian model, but it has quite a high threshold. I think the case of Uruguay is very interesting. In 1992, the IMF said they needed to follow an austerity programme because they were spending too much money. They had a referendum on that, which fell, and the political class said that this was going to make the country bankrupt. But it did not, because then they just had to change their spending priorities. So yes, my favourite model is Uruguay, or Italy I guess. Uruguay is probably the most peaceful, the most prosperous and equal society of the Latin Americas and I think that is largely because of those mechanisms.

What is interesting, people always say that if you allow direct democracy, it will end up in chaos. Now, what is so interesting about referendums, is that the most successful places tend to be those where they also have referendums. Norway is the odd one out, but they have oil, so that does not really count. The most innovative states in America: Oregon, Washington and California all have high levels of direct democracy. Switzerland of course has it. And it’s very difficult to find examples of places where more democracy led to less prosperity. All of those places are economically very strong with high levels of social well-being. This is not because of the political parties. This is because politicians are forced by direct democracy to get their act together.

I teach philosophy as well, and I was teaching Immanuel Kant this morning. In his Aufklärung, he writes that enlightenment is to take people out of their self-incurred irresponsibility. You need to allow people to trust their own reasoning. Do not just say to people they have to trust someone else’s reasoning. I think that is Aufklärung, to use the German word, allowing people to trust their own judgment. More direct democracy is basically Kantianism in practice – it is part of the enlightenment idea of being a mature people. Of course, Kant also wanted referendums: in his Perpetual Peace he said that we should have a referendum every time we go to war, and then we would not have wars anymore.

Finally, we have to come back to Brexit. As you mentioned, the precedent for a second referendum is there, but the political consensus seems to be lacking. Do you think there will be a second vote?

My whole argument is that if you sell your house, you do not just accept the price that the estate agent is giving you. That would not be acceptable. The people did not vote for No Deal. Boris Johnson was actually running around during the referendum campaign saying, “If we vote Leave, of course there will be a second referendum. That is always the way it is with EU topics.” What the people voted for was a second referendum!

Since 2017, there has not been a single opinion that suggested that people would want to leave.  I think November 2017 was the last time there was one poll that said people supported leaving the EU. The support for staying in the EU is now around 56%. So surely people should be allowed to confirm what they voted for. Whether they will have it, is a different matter of course. But, I think it would be profoundly undemocratic, once we have a deal, that we would not allow people to vote again. And I find it very difficult to understand the argument that it would be undemocratic to have a referendum. How can it be undemocratic to ask people what they think?