In Denton, a city of 120.000 inhabitants in the North of Texas, the Council has overruled a citizens’ initiative that had led to the banning of oil and gas drilling. At a meeting on 4 August 2015, the Councillors decided to pass new rules for hydraulic fractioning (‘fracking’) although a citizens’ initiative (or ‘ballot measure’ in US English) had succeeded in prohibiting fracking.

United under the slogan “Frack Free Denton” citizens had protested against fracking in their city last year and put an initiative on the ballot of 4 November 2014. This ballot measure was approved, and hence Denton should become the first major city in Texas to permanently prohibit the use of fracking within its city limits.

However, the city never enforced the initiative as two lawsuits were filed immediately, arguing that the state (and not the city) had the competence to ban gas and oil drilling. The state of Texas introduced a new law as a response to the anti-fracking initiative in March 2015, the “Texas House Bill 40”. The City Council of Denton then approved parts of this House Bill 40 in June and August 2015, making the anti-fracking initiative of Denton illegal.

The citizens’ alliance behind the “Frack Free Denton” initiative, the “Drilling Awareness Group” stated on its Facebook-site that the initiative remained “committed to advocating for the wishes of the Denton voters who expressed themselves loudly in November, 2014 by siding with health, well-being, and environmental protection.” They were continuing to work to overturn Home Bill 40, while “working within the limitations of the bill to find ways to protect Denton” (Source here).

On the anti-fracking ballot measure by Ballotpedia here

Upcoming event in this context 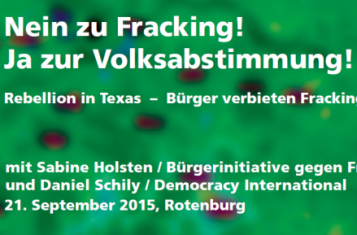