It's not just a cliché: In the United States everything is huge: The width of the streets, the portions of food and the vastness of the landscape. After travelling Kansas, Missouri, Arkansas and Louisiana from 3 to 9 November on the occasion of US Election Day 2014, we need to add a fourth point:  Democracy at local and state level. This is the lesson we learn from Democracy International's study tour. This is an account of five episodes.

For US election day 2014, the official ballot of County Jackson, Missouri asks voters to decide on 25 issues. Amongst those are the appointment of court judges and state auditors. Also, constitutional amendments proposed by the General Assembly or the people need to be decided upon. In general, 26 states have direct democracy at state level, 146 ballot measures in total are put to the people on 4 November 2014. 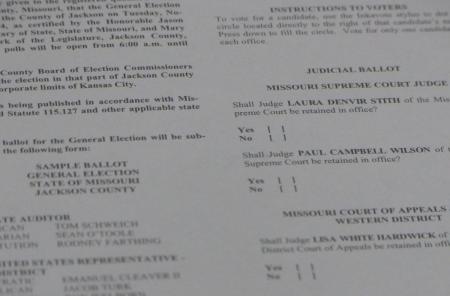 In the US state Missouri, citizens have to make up their mind on whether to establish early voting (which would mean the possibility to vote six days ahead of Election Day). Also, on the ballot are the evaluation of teachers and the question whether to allow evidence of prior crimes, which sex crime defenders have committed when brought to court. Visiting a polling station in Kansas on US Election Day makes clear: US citizens have the right to vote on a load of things. This stands in strong contrast to Germany for example, where voters just opt for their favorite political party every four years.

In the evening of US Election Day we visit the Election Board of Independence, County Jackson in Missouri, which is the central body organising everything around elections. Here we learn how the voting and the counting of ballots function. In County Jackson, touchable screens are in operation, or in other words, voting with pen and paper are outdated. Yet to have record of the votes casted, a paper ballot is printed immediately after voting that the citizens then cast into ballots. 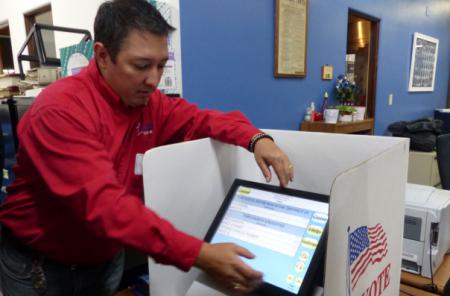 Those metallic boxes (also containing the votes of absentees) are transported from the voting districts ("precinct") to the Election Board. There, (paid) volunteers cross-check the ballots. Tammy, the Director of the Election Board, tells us that "the ballots are never left with one person". Or, putting it differently, a Republican and a Democrat always accompany the ballots on their way. This statement strengthens our overall impression: The casting and counting of votes is secure.

Sandwich with US Secretary State of Kansas

"Is this the next President of the United States?" One might believe so when witnessing Kris Kobach, US Secretary of State of Kansas. Smart and rhetorically skilled (a graduate of law and politics from Harvard and Oxford), handsome (dressed in a white shirt, tie and dark suit) and a family man (married with four daughters, he brought along one of them). These are the characteristics to describe Kris Kobach with when watching him. We had the honour to meet the Secretary State in a coffeeshop in Kansas City on US Election Day. He was running for re-election so to be responsible for the elections and the registration of lobbyists for another four years. (And as we learned in the evening Kris Kobach won with a comfortable margin). 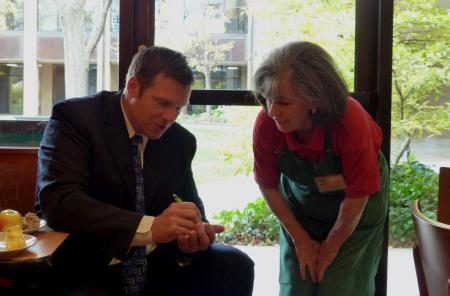 The person who loves hunting has written a book "The Referendum: Direct Democracy in Switzerland" published back in 1994. Today Kris Kobach is a Republican and keenly advocates the introduction of voter-ID, a hot issue currently debated all over the USA. In Kansas, the presentation of an electricity bill or an official letter suffice to vote. For Kris Kobach, this lax, liberal rule is the reason for voter fraud. Voters should identify themselves with their passport, naturalisation document or birth certificate.

If Kris Kobach was elected US President some day, there will be hope for the introduction of the nationwide referendum in the United States. Thus being questioned on how to improve the political system, the State Secretary replies that the US Constitution should be amended to implement direct democracy at national level. "I wish I could be more optimistic" says Kobach in view of realising his goal in his or daughter's lifetime. This is because a 2/3- majority in Congress is required to change the Constitution. - In other words, in the United States direct democracy does not exist at national level, while it is vivid in the states and municipalities.

Ed Hardesty, a proud owner of a coffeshop, introduced himself "as the mouthy one". And it is true: Ed is the one who talks most of the four City Councillors with whom we meet in Carthage on 5 November  while travelling down to Arkansas. 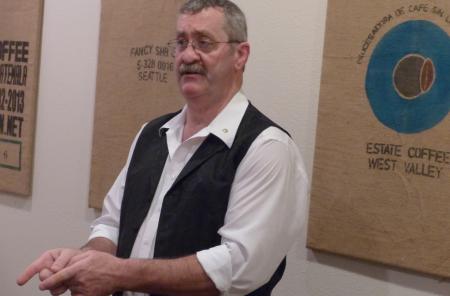 Carthage, also nicknamed "the Maple Leaf City", is a town of 14.000 inhabitants and located in the South West of Missouri. The public executives tell us that citizen hardly ever make use of the initiative and referendum in place. This is because the elected City Councillors offer that much civic participation that their citizens are included already in the drafting of the laws that will affect them. Also it is striking for government at local level that party affiliation to either Republicans or Democrats is not the decisive factor when running for elections. Instead, the ten city councillors and the mayor are elected on grounds of their merits and their ideas for shaping the future of their small city.

Bus driver Eddie, also a blues singer whose songs we listen to during our journey, eventually brings us to Little Rock, the capital of Arkansas, on 5 November. Stepping out of the bus at first we see a wooden horse, placed on a van. Behind the attrape Paul Jacob of the democracy group "Citizens in Charge" waits for us with this brother Tim. 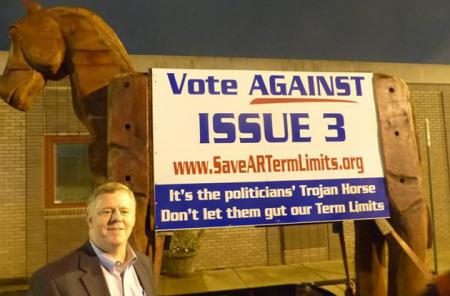 Paul Jacob and his campaign van

They have just lost the campaign against amendment 3, which will extend the length of term limits from 8 to 16 years. The brothers explain to us that the wording of the amendment was completely misleading as giving the impression that the term limits would be kept if voters said Yes. Therefore, like the Greek myth, people were mislead and trapped.

Although direct democracy exists in Arkansas, not everything is perfect and its best rules and designs need to be fought for. This is the what we learn from our stay in Little Rock while meeting with Bettina Brownstein, a lawyer who filed a lawsuit to defend the right to initiate petitions or Paul Spencer, local activist of the Occupy Wall Street movement.

On Friday evening, the 18 participants from countries as diverse as Uruguay, India, Bulgaria, Germany, Switzerland, Sweden, Austria, the Netherlands and the USA reach New Orleans after an 8-hour- drive along the Mississippi. Travelling by bus down route 55 makes evident the enormous size of the United States. (On the map the distance we make just covers three centimetres). 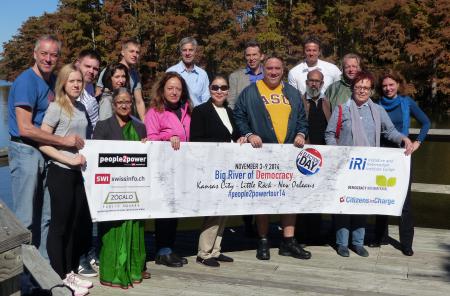 The participants at the Mississippi in Louisiana

The many impressions that we gathered during the past 6 days still need to sink in. Yet one thing is clear: US politics and democracy are much more than watching two men running for US Presidency every four years. It is the women and men counting the votes, drafting ballot initiatives and the friendly waiters serving huge portions of food. All this we will have in mind next time we hear from the United States of America.

Text and Photos by Cora Pfafferott