How would it work? 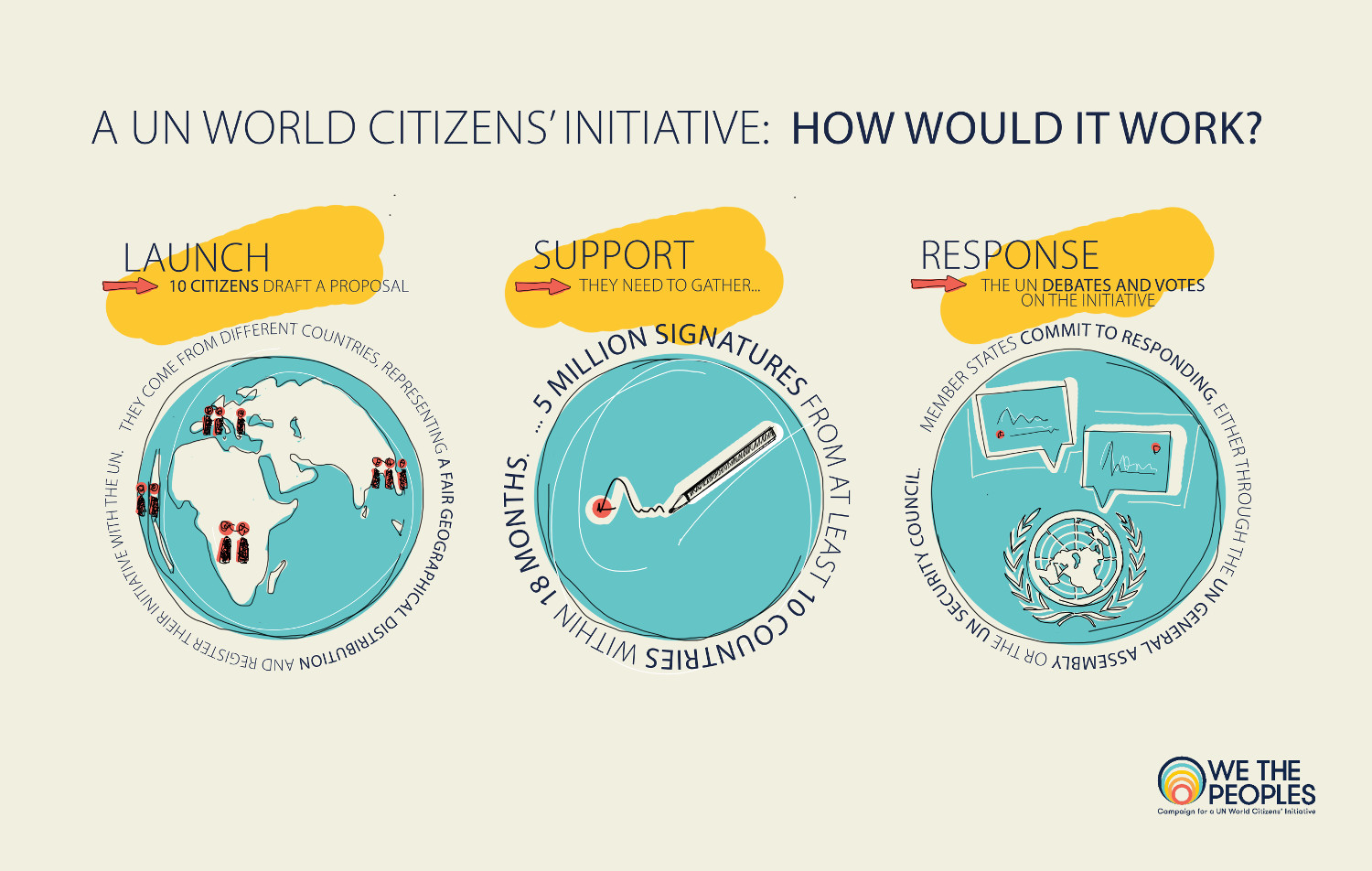 A World Citizens’ Initiative at the United Nations (UNWCI) would enable people from everywhere in the world to make their voices heard and put their topics and concerns on the agenda of the General Assembly or the Security Council.

Join us in our call for inclusive and democratic global governance! We the Peoples

1) Campaigning for a World Citizens’ Initiative

Democracy International, together with Democracy Without Borders and CIVICUS, has been campaigning for the introduction of a World Citizens’ Initiative since 2019, aiming to re-shape global governance to be more inclusive and democratic. The 75th anniversary of the United Nations in 2020 opened a rare window of opportunity for reform, including democratic reform, of the United Nations. Following the theme “The future we want, the UN we need”, the year was dedicated to a series of consultations, involving a total of 1.5 million people from across the globe. Based on these consultations, the UN75 report has been drafted, in which suggestions for a more democratic and participatory UN are being collected. Here, the introduction of a World Citizens’ Initiative is explicitly mentioned.

In an informal dialogue of the candidates for the presidency of the General Assembly in May 2021, Democracy International was able to put forward a question on their views of democratic reform of the UN, highlighting the possibility of a UNWCI. Honourable Abdullah Shahid answered to this question by stressing the importance of the UN to “connect with the people”.

In 2021, together with the civil society organizations Democracy Without Borders and CIVICUS, Democracy International introduced a new joint initiative “We the Peoples,” calling for a more inclusive and democratic UN through the introduction of three specific measures, including the UN World Citizens’ Initiative. The campaign now counts over 100 supporting groups and can be endorsed here.

Still, the journey towards the establishment of a UNWCI continues and is accompanied by the rise of global challenges.

2) A reform at the global level Is needed

With globalization, international political architectures and the occurrence of challenges that transcend national borders, the involvement of citizens on a global level is also necessary. Challenges like climate change, pandemics, violent conflict and inequality require the involvement and active participation of stakeholders on all levels.

The introduction of a UNWCI aims to tackle the extremely indirect character of intergovernmentalism practiced in the halls of the UN and strengthen the commitment to and practices of multilateralism that are based on involvement and active participation of citizens and civil society in the processes leading up to the decisions. With a UNWCI, citizens can submit proposals to the UN General Assembly or the UN Security Council, depending on the matter at hand. Implemented and used, it can become a meaningful tool to move from the pure representation of states to the equitable engagement of citizens and active involvement of global civil society.

The meaningful involvement of citizens on the global level, will enhance both the legitimacy and accountability of the UN, and the agency of citizens opening the stage for a true UN of the people. This is why we call on the UN to implement a UNWCI and ensure the introductory line of the Preamble of the UN Charter of “We the Peoples of the United Nations”.

The UNWCI can enable an idea to be placed on the agenda of the General Assembly or be discussed in the Security Council in a three-step-process, as outlined here:

For this, ten people from across the globe form a committee to plan, lead and later promote the campaign of their initiative. Once successfully registered by an administrative board established and managed by the UN themselves, the organizers have to collect a total of 5 million signatures over the time of 18 months. If they succeed, their submission will be placed on the agenda of the General Assembly or be discussed in the Security Council.

You can find a more detailed step-by-step process here: UNWCI – How will it work?

More about the campaign: 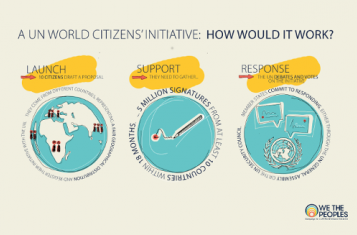