Europe one step closer to the citizens

Europe one step closer to the citizens

On Monday, 28 September 2015, Europe came one small step closer to its citizens. The European Parliament’s Committee on Constitutional Affairs (AFCO) collectively agreed on proposals for improving the European Citizens’ Initiative (ECI) and called on the European Commission to urgently revise the law governing the ECI.

This vote sets a positive signal for the future of the European Citizens’ Initiative in a context of strong disillusionment with the instrument and growing distrust toward the EU institutions. The ECI came into practice on 1 April 2012 ago to bring citizens closer to the EU institutions by giving them the opportunity to directly influence EU policy. However, three years later the public’s resentment at how the instrument is handled by the authorities is soaring and the ECI seems to have lost virtually all its credibility and vitality. With merely two initiatives launched in 2015 (compared to 23 ECIs proposed in 2012), the failed aspirations of the ECI can all but be ignored.

Proposals adopted for the ECI revision

Given this, the decision of the Parliament committee to adopt manifold proposals to make the ECI more user-friendly is a major forward-looking step. Proposals adopted by AFCO in the “Report on the European Citizens’ Initiative” address three types of reforms: first, technical and procedural enhancements, secondly, broader access to take part in the ECI, and lastly, a marginal increase in the political response to successful initiatives. An issue that has been utterly neglected in the report is the permission for ECIs to deal with changes to the Lisbon Treaty – that is, a 400-page document regulating almost every aspect of EU policy.

Proposals that were accepted in order to improve the ECI process include better guidance and legal advice for ECI organisers from early stages on, greater flexibility in the registration and the commencement of the signature collection process, and free translations of all ECI texts. To augment accessibility, AFCO proposed to lower the participation age to 16, to make ECIs available also in minority languages, and it urged all member states to harmonise the data required to sign ECIs.

It has become widely acknowledged by the European Parliament and forcefully emphasised by civil society and past ECI organisers that the ECI will not regain its credibility unless it becomes better integrated into the democratic process and unless successful initiatives are sure to have a significant political impact. And yet, the political follow-up to ECIs adopted in the report is very restrictive. It was decided that the Commission must present a legal act on successful ECIs within one year, but only if the Commission first issues a positive opinion, and that if it fails to do so, the Parliament could propose to draft an own-initiative report on the subject, but only if it deems necessary.

The report could have been a milestone for direct democracy in Europe. But instead, the Parliament opted for an instrument that appeases the citizens but does not give them a real influence over the EU legal process. When will our policy-makers understand that mere technical and bureaucratic improvements are no longer adequate to address the fundamental flaws in our democratic system? And when will they recognise that politically sensitive opinions amongst citizens will not be suppressed by merely disregarding them?

Next steps in the reform process

In the last days, thousands of activists sent a total of 70,532 emails to the EU Parliamentarians that voted on the ECI, calling on them to stand up for a stronger citizens’ right to influence EU politics. In the next step, the ECI report will be voted on by all members of the European Parliament (MEPs) at the end of October. By then, we need to show them that we reject closed-door politics between elites, we refuse to see vested interests of lobbyists dominate the political debate, and instead, we demand a true right for citizens to propose new EU law.

So far 20,188 people – from Helsinki to Lisbon – have signed to declare their support. We need to mobilise all our forces to collect even more signatures before the entire European Parliament votes on the future existence of the European Citizens’ Initiative. Please sign the petition and pass it on to your friends, family and colleagues. Send them an email or post it on your Facebook wall, to encourage them to take action too. 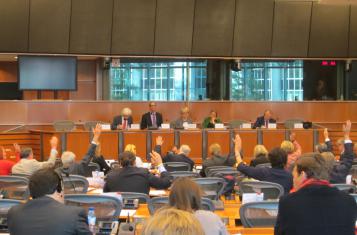 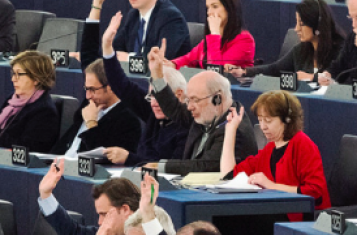 The constitutional committee of the European Parliament (AFCO) has scheduled a decisive vote on the European Citizens' Initiative for Monday, 28...
read more