"We must think together to develop political expertise!” This is the core commitment of the Swiss think tank Denknetz, which organised the Reclaim Democracy conference from February 2-4, 2017 in Basel.

“Denknetz” was founded in Zurich in 2004 as a politically independent association and now has more than 1,200 individual members. The think tank is structured as a series of working groups on themes such as migration, tax distribution, fair working conditions, care work or education. Through common periods of reflections and discussion, democratic expertise is developed that benefits society broadly and not just individual interest groups. Many of the members have connections to trade unions and political parties. This enables the association to feed the commonly developed policy positions into law proposals and political campaigns.

For example, ideas and discussion within Denknetz inspired the citizens’ initiative on introducing a minimum wage in Switzerland, which led to a nationwide vote in May 2014. Denknetz’s positions and debates are published in newsletters, books and magazines.

Twice a year, the think tank hosts an assembly. Reclaim Democracy is the first assembly of 2017.

However, the event in Basel – with over 1,800 participants from Europe and beyond - was much bigger than usual, as volunteer coordinator Simon Rutz explained: “The three-day event at the University of Basel, which co-hosted the conference, looked at how democracy can be revitalised by strengthening human rights and participatory democracy.

In his closing remarks, Beat Ringger, Denknetz’s co-director, invited participants to join the think tank in order to learn from others. Denknetz plans to continue its cooperation with 24 partner organisations and institutions involved in the conference. 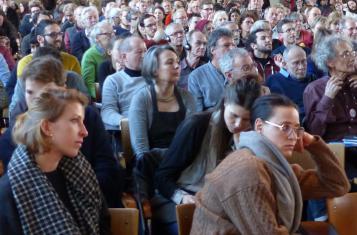 Direct democracy is becoming increasingly popular in the form of peoples’ initiatives and referendums. It’s also being preached by populists both on...
read more