Switzerland to vote on foreigners, tunnels, marriage and food

Switzerland to vote on foreigners, tunnels, marriage and food

On Sunday, 18 October 2015, Switzerland's 5.3 million eligible citizens will elect the members of the two national chambers of Parliament – the National Council (200 seats) and the Council of States (46 seats). The new parliament will then elect the new coalition government on 9 December 2015. While these elections take place only every four years, Swiss voters on all political levels (local, cantonal/regional and national) are invited on a daily basis to make their votes count and have their voices heard. Our board member Bruno Kaufmann presents to us the upcoming initiaitves.

Ten nationwide citizens’ initiatives are currently open for signature collection. However, by no means all of those initiatives manage to attract the necessary 100,000 supporters within 18 months as required by the Swiss Constitution (Art. 139, 193, 194). Almost every year, there are four rounds of popular voting across the country, including municipal, cantonal and nationwide issues – bringing the average number of decisions taken by an active Swiss citizen to 30-40 per year.

This is a lot, but clearly not too much for most people, as more than 90 per cent of the electorate takes part in a popular vote sometime during a four-year period, as new research by Uwe Serdült (Center for Democracy) and Pascal Sciarini (University of Geneva) suggests. Thus, the average participation rate for elections of less than 50 per cent does not reveal the true political participation rate in Switzerland. 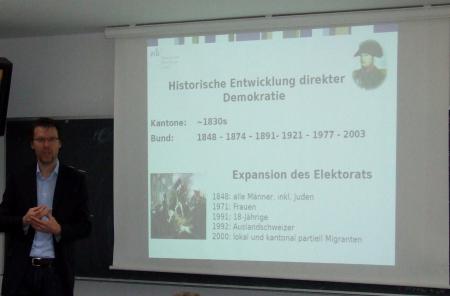 Dr. Uwe Serdült of the Centre for Research on Direct Democracy

Upcoming in 2016: Initiatives from the right, center and left

And a lot of interesting issues will be on the ballot already early in 2016: on 28 February 2015  three citizens’ initiatives and one popular referendum are to be decided on. The Swiss government decided on October 7 to put the following issues to the people:

An initiative by the right-wing ”Swiss People’sParty” (SVP) to implement their earlier and successful (28.11.2010, 52.3% yes) initiative to expel residents of the country without a Swiss passport who have committed certain kinds of crime. The parliament introduced the internationally mandatory check on each individual case, but the SVP denounced this as not following the popular will – and launched this second initiative, which gathered 155,000 signatures earlier this year.

However, even if this new initiative secures a majority at the ballot box, the courts will still have to look into each individual case of a so-called ”criminal foreigner” before this person can be expelled from the country. The initiative is a good example of several proposals put forward recently in Switzerland which indicate a conflict between the sovereignty of the national electorate on single issues and the international legal obligations the same electorate has approved. While the SVP is promoting the initiative, most other parties and the government are recommending a ”no” vote.

A popular referendum supported by 75,000 citizens to vote on a proposal by the parliament to construct a second road tunnel through the Alps at the Gotthard. The creation of a second tunnel of about 17 kilometers in length would allow the original tunnel (opened in 1980) to be renovated. After that (from 2030) the two tunnels would be used in just one direction each, and not – as many environmental groups fear – to further expand the road capacity through the Alps. The popular vote is one in a long series of citizens’ decisions aimed at moving most cargo through the Alps from roads to railways.

As a consequence of another referendum (in 1992) a new high-speed railway connection through the Alps will be opened in December 2016. With a length of 57 km, this will be the longest such tunnel in the world. The vote on February 28 will be the third decision by the people about a second road tunnel – in both 1994 and 2004 they said “no”. Both government and parliament recommend a ”yes” vote, while most Left-Green parties and many environmental organizations are against the new tunnel.

Promoted by the Christian Democratic Party (CVP), a citizens’ initiative about the definition of marriage (and its limitation to unions between a man and a woman) will also be on the ballot in February. Already back in 2005 the Swiss approved a proposal to allow same-sex partnerships, while not putting such arrangements on the same footing as formalised heterosexual relationships. The CVP initiative now proposes to make such a development impossible. Like related conservative law proposals in the US the government party also wants to abolish tax disavantages for married couples. The proposal is supported by the CVP, of course, and also by the right-wing SVP – but it meets with much opposition from the center-left and many organizations. Both government and parliament are recommending a ”no”-vote.

Sponsored by the Young Socialists, this initiative ”against speculation with food” takes up a demand by many international development organisations which are very critical of the way big multinationals – like the Swiss-based Nestlé company – are making large amounts of money out of poor countries affected by malnutrition and starvation, for example by selling milk-replacement products.

As many of these companies are registered in Switzerland, a “yes” vote would have a major global impact on the business with hunger. In the past, left-leaning Swiss parties and organizations have repeatedly, but without great direct success, proposed new codes of conduct for such companies involved in controversial business – including the banking and armaments sectors. However, most often a majority of Swiss parties and voters oppose such proposals out of fear of their economic consequences. Once again, in this case all the centre-right parties, as well as the Government and Parliament, are recommending a “no”- vote.

Direct democracy in Switzerland since its beginnings

Since the establishment of the modern Swiss state – the Confederation – in 1848 and the introduction of the nationwide citizens’ initiative, 441 such initiatives have been launched. 313 of them managed to get enough support from the people (at least 100,000 signatures within 18 months) and 198 were ultimately voted on. While only four initiatives were invalidated by Parliament (based on clear criteria), most of the others were withdrawn by their organising committees because the parliament had reacted by introducing certain reforms ahead of a possible vote – which made the proponents happy enough.

Out of all the citizens’ initiatives, only 22 (11.1%) managed to get the required double majority from the people and the cantons at the ballot box. As with the optional referendums (which can be requested by at least 50,000 citizens within 100 days after a decision in parliament), the most important consequence of Swiss direct democracy is not its direct effect – in terms of formal decisions – but its indirect one: in influencing the whole process of a modern representative democracy to become more responsive and representative.

Article by Bruno Kaufmann, board member of Democracy International and editor-in-chief of the online portal people2power

- The Swiss Government on the upcoming votes on 16 February 2015

Credits: Photo on the top by swissinfo.ch