The first Summer Academy for Democracy Development took place from 23 to 25 August 2019. It was organized by the Academy for a Learning Democracy (a project of Democracy International), the Global Ethic Institute of the University of Tübingen and the Procedere Verbund für Procedurale Praxis.

The weekend seminar was dedicated to the questions of what democracy development means, why we need it, and how the concept can be both disseminated and professionalized.

We met in the beautiful town of Tübingen to discuss democracy development under the direction of Dr. Raban D. Fuhrmann (Academy for a Learning Democracy) and Dr. Christopher Gohl (Global Ethic Institute). The group was made up of scientists and experts in politics, democracy and organisational development, and students who were simply interested in the topic. In the days that followed, this diversity led to lively discussions and different perspectives, which enriched the Summer Academy and its results.

Friday evening began with a relaxed arrival, getting to know each other and an introduction to the topic. First we discussed what democracy development means and what it should be used for. Many of the participants had decided to attend the Summer Academy because the topic seemed exciting to them. However, they could not imagine much of it yet. 'Democratic development' means developing our democracy into a learning, reflective system that could meet the enormous challenges of the 21st century better than it currently does. This became clear quickly. It can also be used as a reaction to the increasing numbers of people who are losing confidence in democracy and politics and therefore are turning to populist parties and movements or turning away from politics altogether.

On Saturday morning, we gathered again at the Global Ethic Institute to delve deeper into the topic. The first input was devoted to the question of what it means to be professionally active in the development of democracy, or what the ethos of this activity should be. It was particularly emphasized that democracy developers should have an optimistic attitude towards the future. They should argue that can shape our democracies and societies better together. Democracy developers should see their main task in strengthening the capacity for dialogue and ensuring that our democratic processes are better, more participatory and more sustainable. Democracy developers therefore focus on shaping political and social processes and have the skills to shape these processes in such a way as to produce feasible solutions. From the ensuing discussion, it became particularly clear that democracy developers should not be afraid of complexity, because just as our social challenges are highly complex, the appropriate solutions must also be complex.

At that time there was still some uncertainty among the participants as to what democracy development means in concrete terms and where it should start. However, this became clearer through input on the tasks of democracy development: it should start at the various interfaces of our society and democracy that are necessary for cooperation and thus the functioning of political and social processes. This classically includes the cooperation or participation of citizens with/through politics, for example through referenda or surveys. However, cooperation between the various political and administrative levels and departments, between different civil society actors or between the political system and those groups that are not well integrated and socially marginalised is also important. Democracy development should start at all these interfaces and ensure that participation and thus cooperation function better.

The seminar leaders also presented the idea that there could be a central interface that would coordinate all this development work and become the fourth pillar of the state (alongside the executive, judiciary and legislative). These ideas were positively received by the participants. Several people added, however, that such a holistic development is only possible if the majority of citizens are convinced that democratic development is possible and necessary. This was seen as a very difficult task. On the other hand, it was added that the powerful in politics, administration and economy must also be reached, because without them a real introduction, professionalization and institutionalization of democracy development would not be possible.

Then we discuss what concrete skills and abilities democracy developers should have. Among other things, moderation, mediation and process design with their numerous methods and tools were mentioned. Democracy developers should also be able to vision and inspire people. They should have the ability to understand people from different backgrounds and to communicate with them. Finally, Dr. Fuhrmann presented a draft curriculum for a possible education or a course of study for democracy development, which contained the skills and topics we had collected and other topics. We ended the evening with a walk through the city and a dinner where we discussed our ideas and questions, but also got to know each other better.

The last day was about drawing personal conclusions, thinking about how we should proceed with the issue and what steps could be taken to spread and professionalise the development of democracy. In a creative group work we painted and drew the vision and strategy for democracy development by presenting our democracy and its development as a garden, as well as a ship. At first, some participants seemed a little skeptical about this rather unusual method. A short time later, however, everyone painted flowers (as social and welfare state achievements), pirates (as populist and right-wing extremist movements and parties) and much more. When we discussed our pictures it became clear what most participants saw as the most important points and steps in the development of democracy: the development of democracy should not only reach politicians and administrative staff, but also citizens. There should be spaces that can be jointly developed by cities and municipalities as well as business and civil society, in which ideas and projects for our democracy and our future can be conceived, supported and set in motion. For this, however, we need trained and capable experts, which is why the group also advocated a school or education for democracy development.

In the final round, we review the past few days and present the most important personal findings and our own ideas for action. Interestingly all participants set different priorities, depending on their background. For a teacher training student, for example, it was particularly important that he wanted to let the desire and trust in democracy flow more into his future teaching. For all of us these were exciting and intensive days. Now we will see what next steps we can take on the way to a learning democracy. 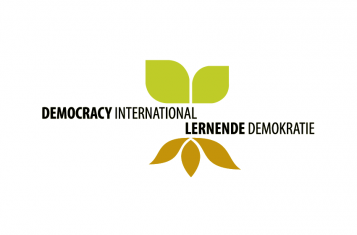