"For a more democratic EU - for a Europe of the Citizens"!

“Right2water” is the first European Citizens’ Initiative (ECI) in history that has been subject to a hearing at the European Parliament in Brussels. The initiative had fulfilled all the requirements as it had collected more than 1,8 million signatures in thirteen EU Member States. During the hearing, which took place yesterday afternoon, representatives of the citizens committee responsible for the Right2water initiative urged the Commission and Members of the European Parliament to maintain water as a public good, thus avoiding any form of privatization.

Ultimately, the initiative demands from the EU to declare access to water and sanitation as a human right and to adopt a legislative proposal accordingly. Overall, there was a comprehensive agreement that yesterday’s first hearing was an historic event for European democracy. During the hearing’s opening, Gerald Häfner, Member of European Parliament and chairperson of Democracy International, described the ECI as “a monumental step from a Europe of governments to a Europe of citizens”. In addition, Matthias Groote, Member of the European Parliament, who chaired yesterday’s hearing emphasized that Right2water as the first ECI was “a milestone for direct democracy in Europe”. 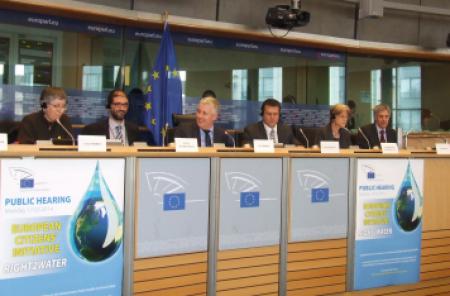 The panel of the first ECI hearing on "Right2Water"
Indeed, the first ECI can be classified as a general success, most importantly because it has directly contributed to the agenda setting of the European Union. As a reaction to the massive protest against water privatization, Michel Barnier, Commissioner responsible for the internal market and services promised to remove water from the directive on the award of concessions contracts. Citizens had been worried that the directive’s provisions regarding water could lead to water privatization throughout Europe. As a reaction many people had signed the Right2water initiative.  While Erhard Ott, German member of the citizens committee explained that the concessions directive was not the focal point of the initiative, it had allowed this ECI to get much more public attention and that the removal of water from the legislative text had been a first success. 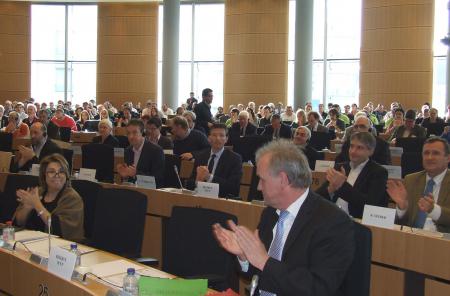 The audience of the hearing, approx. 400 people attended the event

Nonetheless, during the hearing Commissioner Šefčovič could not make any further promises to the organizers of the initiative as to if or how their ECI will lead to a legislative follow-up. However, he has ensured that the Commission would include all points discussed during the hearing within a communication that will be published by the 20th March 2014.  A communication is a policy document that entails no mandatory authority or legally binding effect. This is in line with the Commission’s attitude during the hearing, which has already left the impression that there will be no legislative proposal as a reaction to the Right2water initiative. Jonathan Faull, Director General for the internal Market and services at the European Commission, emphasized that the EU had no competences to dictate Member States if water should either be maintained a public good or if it should be subject to privatization. This was highly criticized, however, since the Commission as part of the troika – the control organ that decides on the austerity measures in EU countries that need financial help – has agreed on measures to privatize water in countries such as Greece.

The hearing, which took 3,5 hours in total, was organized by the European Parliament’s committee on the Environment, Public Health and Food Safety (ENVI). This is why Matthias Groote  (MEP) was in charge of chairing the hearing, as he is the chairperson of the ENVI committee. The hearing was divided into three different rounds: “Guaranteed water and sanitation for all in the EU”, “Global access to water and sanitation for all”, as well as “No liberalization of water services”.  Each of the three rounds was structured according to a specific format: First, a representative of the Right2water initiative gave a presentation on the topic at hand. This was followed by a round of questions and comments by members of the European Parliament. The representative of the initiative was then given the opportunity to respond to the questions having a time slot of eight minutes. Moreover, a representative of the Commission could react to the points raised during the discussion at the end of each round. The hearing began with an opening round and ended with several closing statements. 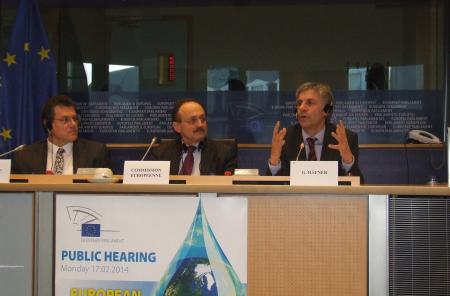 A very positive aspect of the hearing was the high quality of the debate as well as the fruitful exchange between the stakeholders. Moreover, the fact that people in high political positions such as the Vice-President of the Commission Maroš Šefčovič, several Director Generals of the Commission as well as a significant number of MEPs took the time to attend the session already indicates that the ECI is taken seriously at the political level. The high number of attendants in the audience – approximately 400 people – equally illustrates the importance of the ECI as a political tool.

Nevertheless, criticism needs to be raised for a variety of reasons. Firstly, the format of the hearing itself was structured very strictly, not leaving room for any flexibility in the discussions. Speaking time was allocated to a chosen number of people whereby only members of the citizens committee had the permission to speak on behalf of the ECI. Otherwise it was mainly MEPs who had the possibility to make their voices heard during the hearing. Hence, the audience was completely excluded from the discussion and citizens who have been – for example - directly affected by water privatization did not get the possibility to share their experiences. Secondly, no representative of the Council did attend the hearing, which is the third institution, besides the Commission and the European Parliament, in the institutional triangle that is the EU. 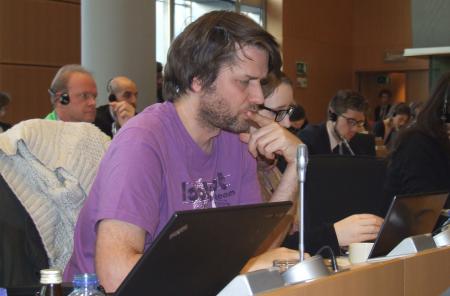 Xavier Dutoit, he had programmed the online collection system of the ECI "Right2Water"

However, if the ECI is to become a fully-fledged tool for direct democracy on the EU level, it is essential that at future hearings all EU Institutions are present to listen to the citizens and their demands. In this regard, it is also unfortunate that the President of the European Commission did not choose to attend the hearing. Finally, problems did arise regarding the hearing’s logistics. The web-stream to broadcast the hearing online did not work in the beginning of the meeting so that citizens who did not have the possibility to come to Brussels missed important parts. Moreover, the ENVI committee, responsible of the hearing did reimburse travel expenses for only three members of the citizens committee.

Ultimately, a final conclusion of the first European Citizens Initiative and its democratic value can be drawn when the Commission will publish its Communication in March. Then it will be clear if the Commission really acts, as was demanded by the initiative.