In Country in focus, Democracy International takes a closer look at advances in modern direct democracy and citizen participation worldwide. This month, the spotlight is on the United States.

In the 2016 state House race in Michigan (USA) to fill 110 seats, Republicans and Democrats each won about 50% of the vote. Basic understanding of elections would tell you that each party receives 55 seats to evenly fill the 110 available seats. However, the result was Republicans walking away with 63 seats and Democrats with 47 seats. How is this possible?

This is not a math riddle, nor is this a trick question. Parties are winning an imbalanced proportion of seats thanks to a practice called gerrymandering. Gerrymandering is the process of politicians redrawing district lines so that they are designed to favor a certain party, and in Michigan, it is among the nation’s worst.

Michigan is one of the 37 US states that gives all power of redistricting to the state legislature, with majority party becoming in charge of redistricting. To maximize their winning potential, politicians of the majority party profile and group together their likely voters in several districts.  The likely voters of the opposition party are grouped into fewer districts. The result of politicians having the power to choose their voters is not only a bizarre-looking district map, but also an imbalanced representation. The problem is clear - whichever party has the majority can almost guarantee that they will maintain their majority. Election after election is manipulated like this, and voters result in feeling disenfranchised that their vote doesn’t count in a system where there are uncompetitive elections.

Voters Not Politicians is on their way to change exactly that – to once and for all end the rigged system of gerrymandering and to restore democratic integrity back to Michigan. Voters Not Politicians is an independent, nonpartisan campaign that seeks a state constitutional amendment to change the way districts are redrawn. In Michigan, changes to the state constitution are allowed through citizens’ initiatives, where organizers have 180 days to collect 315,654 signatures in order to become a ballot proposal.

Katie Fahey, President and founder of Voters Not Politicians, says the campaign has seen incredible support. What started as a simple Facebook post “exploded into support across Michigan by virtual strangers.” Voters Not Politicians collects an average of three signatures a minute since launching in August, have collected signatures from all 83 counties in Michigan and are full-speed on their way to make it on the November 2018 ballot.

“The issue of gerrymandering is so fundamental for the people of Michigan,” Fahey said. Along with heavily gerrymandered districts, Michigan is consistently rated one of the least transparent states in the nation. Putting an end to politically-led redistricting once and for all would alleviate the transparency and trust deficit and restore voting power back to the people, where it belongs. “Our biggest success would be a system we can trust again – a fair, transparent system that lets all voices be heard.”

Michigan experienced a double surprise in the 2016 general election. Bernie Sanders won in a surprise upset against Hillary Clinton in the Democratic primary, and Donald Trump won Michigan against Clinton in November – the first Republican to win Michigan in nearly 30 years. “[The 2016 elections] showed that people want something different. Michigan voters are frustrated with the status quo,” explained Fahey. “We consistently hear people saying that gerrymandering is the reason they don’t vote. They feel disenfranchised because they feel that the system is rigged. This was a very heavy message in 2016. It is the fundamental reason we see such broad support from across the aisle. The ‘rigged, anti-establishment’ sentiment is there. There is a lot of frustration, and people are choosing not to wait on the sidelines.”

So, what’s the plan? Voters Not Politicians proposes an independent and nonpartisan 13-member commission of citizens to redraw district lines fairly. The 13 members would consist of four Republican-affiliated, four Democratic-affiliated, and five independent members. The commission would be a mix between randomly chosen citizens and citizens that apply. Elected officials, lobbyists, and other political insiders, as well as their close relatives, are ineligible to serve as a commissioner. 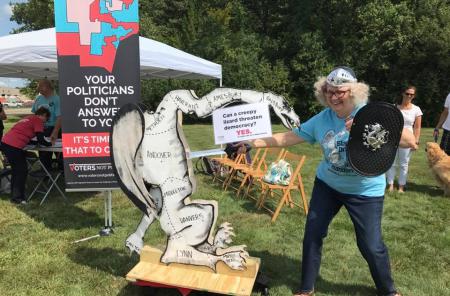 Before the policy was finalized, Voters Not Politicians held 33 town halls in 33 days across the state, including web town halls, and many more town halls have been held since then. After discussion and debate in the first half of the town hall, the second half is an intensive survey asking people what they think should be a fair process to redistrict Michigan. Fahey explains, “Experts help write the language, but thousands of people helped write this policy. We have that direct democracy even within the campaign.”

Voters Not Politicians boasts over 3,000 trained volunteers, at least half of which are first time volunteers. “We have 76-year old volunteers and some who’ve just turned 18!” Fahey exclaimed. “There is a sentiment of ‘I never knew that I could do this.’ Our volunteers are cross-generational, and a lot of them just wish someone had told them when they were younger that they didn’t need permission to go make a difference. These are people that genuinely believe in fairness and transparency and that every voice should be heard, so they hold themselves to that standard while working on the campaign.”

Fahey added that the campaign has also raised USD 300,000 with “over $100,000 donated from our own volunteers giving what they can. Voters Not Politicians is 100% funded by donations from people. We have 13 times more individual donations than other Michigan ballot initiatives.” The campaign has even inspired people to run for office.

“Everything that is in the policy to end gerrymandering is also in our campaign,” Fahey says. Voters Not Politicians is proud to be as transparent as possible and that citizens themselves wrote the policy and shaped the campaign. Fahey says that people were surprised to know that they could propose a constitutional amendment to end gerrymandering. “It’s your right as a citizen to petition the government! It is a feeling across the political aisle that change is needed and that people themselves can bring that change.” Not only is Voters Not Politicians putting the power back in the hands of people, but they are also educating Michiganders in their power and right to participate in direct democracy.