Journalism is the "Oxygen of Democracy"

Journalism is the "Oxygen of Democracy"

What's the relationship between democracy and the media? This question had raised the Swiss public broadcasting channel SRG SSR​ at a conference that took place in Chur, Switzerland, on 25 September 2015.

Democracy International is a media partner of the foreign broadcasting branch 'swissinfo' and therefore was invited. Prominent speakers such as Martin Schulz, President of the EU Parliament, German journalist Sonia Seymour Mikich and Roger de Weck (General Director of SRG SSR) adressed the audience to answer the question.

All speakers agreed that media pluralism and high-quality journalism were the prerequisites for a functioning democracy helping to form people's opinion and their political decisions. In other words, following emotional hypes, closeness to PR and simplifying stories were the threats to democracy.

Sonia Seymour Mikich who is editor-in-chief at the German broadcasting channel WDR (a branch of ARD) and a well known commentator of news on TV, particularly painted this pessimistic development of journalism. Media content had become an economic factor counted by internet clicks and the viewing rate of spectators. However, journalism was the "oxygen of democracy": Journalists had the task of categorising complex information and to critically investigate scandals independent of the spectators' favour. In this view journalists were "citoyens" contributing to equality, freedom, justice - and democracy. 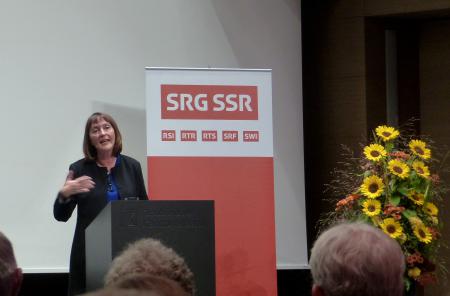 Roger de Weck, General Director of SRG SSR, stressed that journalists had the task of helping to find solutions to political problems through providing substantial and long-term information. In this way compromises could be found in politics, which were the most idle result of people's conflicts. Particularly in view of the refugee situation in Europe, journalists now had the task of showing in a rational way how migrants could be integrated into Europe's societies.

Martin Schulz, President of the EU Parliament, spoke to the audience via video. He compared Switzerland to a "Mini-Europe" that was working because of pluralism of the media - in fact Switzerland's broadcasting channel is composed of four regional branches that roughly correspond to the languages spoken in the federal state. Alluding to Hungary, fostering this pluralism was the role of the European Union that would critically intervene as soon as a government started compromising the independence of the media.

Overall, the conference was attended by about 250 media people from Switzerland. Bearing in mind the huge role of direct democracy in Switzerland's political process, it was not surprising that many "ordinary citizens" / non-professionals were present at the conference also. In Switzerland's public broadcasting system, it is ordinary citizens who act as Presidents of the regional branches to overview  the process, monitoring finances and the administration. In this view, ordinary people control the media in the Swiss Confederation. In other words, in Switzerland people's power is an extra layer of the "fourth power" of the state.