Interviewing Claudine Nierth, born close to Hamburg, Germany in 1967, means speaking to an extraordinary person, led by ideals and ideas that concern the bettering of our societies through the means of direct democracy. How and why did she get active, what makes Claudine Nierth dedicate her life to the introduction of the referendum at federal level in Germany? We have asked Claudine, who is an artist by profession and today one of the spokespersons of the German democracy organisation Mehr Demokratie.

How did your life become so strongly connected to direct democracy?

Everything started in the years 1987 and 1988. At the time I was 19 years old and living on Sylt, Germany’s most Northern island working with artists making pottery. Things were very political then, the use of nuclear power in Germany and environmental protection were big issues at the time. I came across the action for a referendum (“Aktion Volksabstimmung”) and the organisation “Omnibus”, which was touring Germany with a bus to bring the idea of direct democracy close to where the people live.

I asked the organisers to come to Sylt, which they did. The bus was blue, and it was old. I said to Johannes Stüttgen, one of the leading figures behind the Omnibus that there should be a second bus, a white one with a Golden crown. “Yes, there will be another one when you drive it yourself” – this was Stüttgen’s actual response. It took me 12 years to get back to this idea, then I actually realised it. I remodelled a second “Omnibus”, which I drove myself with the overall aim of introducing the referendum in Germany at federal level. But well, this has not happened yet.

Yes, meanwhile 26 years have passed and yet there is not any referendum in Germany at federal level. But you are still active. How do you keep your motivation?

I believe that one single person, who is deeply convinced of an idea, can change the world. I am lucky that I have met people around the German organisation “Mehr Demokratie” who strongly believe in direct democracy and who are hugely committed to bringing about political change. The loyalty of these people to direct democracy and their huge enthusiasm motivate me.

You are an artist by profession. How do art and direct democracy relate to each other?

Art allows to set the maximum standards of quality - Art allows to combine truth, beauty and kindness in a perfect way with each other. We should measure societies with these three maxims. Direct democracy then allows us to decide if we lead a true and good life that is right in terms of true, good and beautiful for us all and to find better alternatives.

And what are your actual beliefs regarding direct democracy?

Direct democracy means the biggest possible form of freedom for a society. It allows single people to change society by initiating a law proposal. But this proposal only comes into effect when the majority of society accepts it. This is the core principle of democracy: You need to accept the decision by the majority. Actually, this acceptance can be pretty painful. It hurts to be a real direct democrat. However, accepting the decision by the majority brings inner peace for society.

A political organisation is successful when it has strongly-willed and idealistic people who are capable of transforming their ideals into pragmatic realism. Only this combination of idealism and realism makes it possible for an organisation to make concrete decisions and, in the end, to realise political change.

What are your next goals?

Of course, the introduction of the referendum at federal level in Germany is one of my key goals. But we are pretty close there. The history of European integration shows that there can only be more European integration in Germany when the German people themselves make these decisions. With regard to the EU, a big goal remains to introduce the European-wide referendum. It will be a real European highlight when all Europeans decide in a referendum one day. 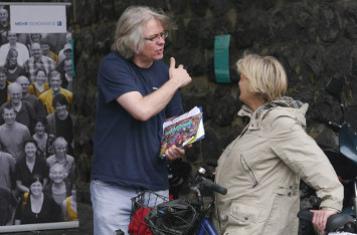 On 22 September 2013 German citizens elected a new parliament. Mehr Demokratie used this event to campaign for the introduction of the citizen-...
read more