"The 'Credit Initiative' is an answer to our crises"

"The 'Credit Initiative' is an answer to our crises"

Gerhard Schuster is one of the key initiators of the "Europe 2019 Credit Initiative", a project currently being formed by people from all across Europe. It aims at granting the right to interest-free credits for enterprises that serve the common good. The "right to credit" is to become EU law by means of a European Citizens' Initiative to be launched in the runup of the next EU elections that are scheduled for May 2019.

Democracy International has interviewed Gerhard Schuster to find out about the ideas and the democratic aspects of the "Credit Initiative" as well as how one can get involved.

We are hearing more and more about the “Europe 2019 Credit Initiative”. What’s really  behind the name? What is the project hoping to achieve?

The credit initiative is about a new way with money and the economy. Today’s economy is an interconnected global entity - holistic reality. That individual companies are understood today as private actors with their own separate interests - the interests of their shareholders, for example, who are looking to maximise their profit - doesn’t fit with this holistic reality. But it’s not a solution either to leave everything to the state as the “general entrepreneur”.

We need to create an independently managed and associatively cooperative economic sphere - between the state and private sectors - within which it becomes possible for free business initiatives to arise which serve real needs and the common good.

How can it be made possible for this new “economic sphere” to come about within our profit-oriented economy?

We want to initiate a first step: a free and fair possibility to finance initiatives through interest-free credits for those enterprises which are prepared to permanently renounce the profit motive and offset their surpluses against the deficits of other enterprises in the associative network - for example, the deficits of not-for-profit or charitable enterprises offering services for which they cannot charge a “market price” which fully covers their costs. 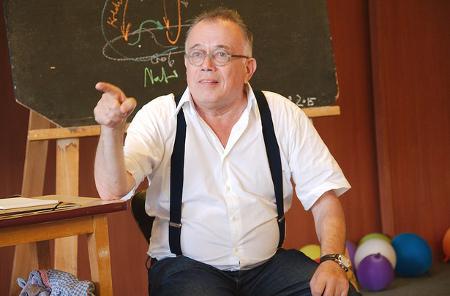 To enable this we are proposing a legal “right to credit” which should be firmly anchored in the statutes of the European System of Central Banks and the European Central Bank. This first step is also intended as a stimulus for reflection and discussion on the fundamental character of the economy - for the real purpose and aim of the economy can and should be solely that of meeting human needs whilst bearing in mind constantly the common good and the welfare of the earth as the environment within which we live and on which we depend. It would then be the task of a money and banking system that is in harmony with those aims to serve such an economy.

Are there also democratic aspects to the “Credit Initiative”?

The Europe 2019 Initiative plans to launch a European Citizens’ Initiative (ECI) in the runup to the next European parliamentary elections with the aim of ‘anchoring’ the “right to credit” in EU law. So yes - what we are undertaking here is certainly a democratic project.

But economics doesn’t have anything to do with democracy per se. What matters in economics is practical knowledge and expertise. Economics doesn’t address us here as equals, but as people with differing talents and qualities. — However, the economic system as such is anchored in law, in the various trade and other laws. And we - as the real “sovereigns” in a democracy - are responsible for the laws. And to the extent that we are applying a lever to the legal system of a community governed by the rule of law - in our case the EU - it is an essentially democratic issue.

The banking and money system is also anchored in democracy. We should no longer see money as having an economic value in itself, but as a ‘medium’ through which rights and duties are transmitted. This implies that when we look at the way money works in the economy we really have to speak of a “democratic legitimation” which provides the basis for the system of social functions we call “money”. — In short, we are not only responsible for the economy as consumers and as ‘co-producers’ trapped in the system through our dependency on our wages. No ... we are also responsible as the democratic sovereign - especially when it concerns the whole picture!

I want to come back to the European Citizens’ Initiative. Why an ECI? What are your (realistic) goals?

Of course, in reality the ECI is still a very weak democratic instrument. It only allows one to make a proposal which the Commission is then obliged to consider. A democratic legislative process which would lead to a binding decision by Europe’s voters is something we still have to fight for! 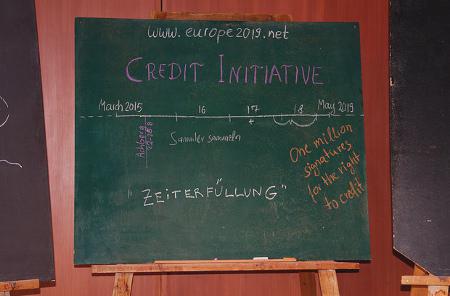 But the ECI still offers the chance of getting a proposal into public awareness by using a democratic process anchored in EU law. This makes it a ‘sovereign’ act - rather than a merely private affair. And it is also important to energise the ECI and take it further. And it is our aim to achieve the one million signatures required for an ECI. In order to do this, over the next few years we want to build up an alliance and find the people who will then be well prepared when it comes to collecting the signatures during the 12 months allowed for signature collection.

From 22 - 25 August there was a conference in Achberg in southern Germany as a first  meeting to launch the project. Who took part? What practical suggestions came out of the four-day meeting for your future planning?

You also asked about the “realism” of our goals. I came away from our meeting with a sense that the achievement of our “big goals“ was now more realistic. We are not a “NO” campaign - just wanting to stop something - but we are making a practical proposal that has to be thought through a little to begin with. But in our meeting, at which some 50 to 60 people took part - most of them from Germany and Austria, but also from Holland and Scotland - it became clear that this initiative is an answer to our crises which confront us every day. 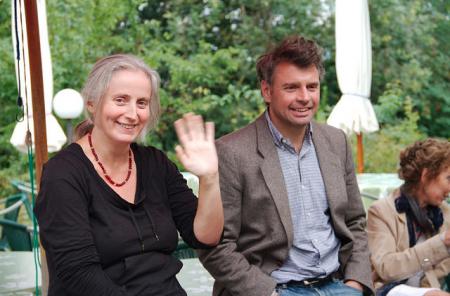 The “Credit Initiative” aims to provide an answer to the “credit crisis” that we can see in the example of Greece, but it is also looking towards the ideal of global solidarity that is so terribly lacking in the world, if we consider the unbearable situation of the refugees. We have to somehow take control of all these things - step by step. But we’re not able do that yet as long as everything is ruled in the capitalistic way. In our meeting we saw this as a challenge for the future and there were already some there in Achberg who want to take up this challenge with us.

There is a website at www.europe2019.net which has a contact link. There is also a newsletter and notifications of events - also on Facebook and Twitter. We have an office in Achberg with one colleague and something is coming about also in Berlin. We need people who can take on specific roles and tasks. On the website it will - I hope soon - be possible to register oneself as a ‘signature collector’. We want to start compiling a list of those who can offer to be ‘collectors of collectors’. Those are the most immediate tasks.