How the Dutch government is trying to delete the referendum law

How the Dutch government is trying to delete the referendum law

Having entered into force barely 3 years ago, the Dutch Referendum law is now under threat. The newly elected Government wants to abolish the law and have had their first succes when their Repeal Law passed the Dutch Lower House last month. Arjen Nijeboer, Democracy International Board Member and Campaigner with our Dutch partner organisation Meer Democratie has fought for more direct democracy in the Netherlands for the past 20 years. He explains what will happen next:

"In July 2015, the Consultative Referendum Law entered into force in the Netherlands. It gives 300,000 citizens the right to trigger a national non-binding referendum on laws and treaties. The initiators of the law – among them the founders of the Dutch NGO Meer Democratie (“More Democracy”) – also introduced a constitutional change proposal in parliament that would make the referendum binding. But as the necessary two-third majority for this was and is nowhere in sight, they opted to also introduce a non-binding version that could be arranged in a regular law.

In April 2016, the first referendum on the basis of this law took place, about the Association Treaty between the EU and the Ukraine. A majority of 61% voted against while a large majority of parliament had voted in favor. Many politicians hated the referendum. They claimed people had voted no for reasons that had nothing to do with the Association Treaty, even though research by political scientists disproved this. They also decried that the initiators were “against the EU”, even though this is irrelevant for the content of the referendum and the motives of the voters.

The government has been heavily criticized for this move by the media, professors of state law and political science, the public and even by political parties who are against referendums but think the government should follow the law and refrain from dirty legal tricks. But it is turning a deaf ear. The government parties in the lower house of parliament have already approved this move and in April or May, the Senate will take the final decision.

Besides a lobby and publicity campaign, Meer Democratie has started two crowdfunded court cases to demand that the government respects the referendum law, which says (in article 8) that any attempt to let a new law – including the Repeal Law – enter into force before citizens have had the opportunity to request a referendum, is legally void.  We have no legal basis to demand that the government does not abolish the referendum. But we can demand that the government does not place itself above the law and allows a referendum. And we have warned the Senate that if they too decide to abolish the referendum law, and a judge will rule in favor of our complaint even if this takes another four years and/or an appeal to the higher courts, then the Repeal Law has never entered into force and citizens have a right to retroactively request referendums on all laws and treaties that have been passed until that moment.

More on the repeal of the Dutch Referendum Law

Citizens sue the Dutch government for abolishing the referendum 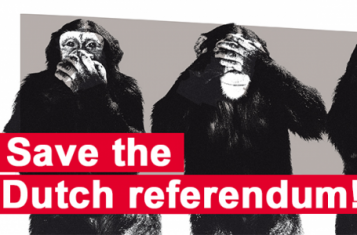 Cologne, Germany, 23 February 2018 The Dutch NGO Meer Democratie has announced it will launch a citizen-supported lawsuit against the Dutch...
read more
Meer Democratie Netherlands to sue Minister over Abolition of the Dutch Referendum

Meer Democratie, our Dutch partner organisation, is starting a legal case against Dutch Minister of Interior Ollongren for her attempts to block a...
read more