The European Economic and Social Committee (EESC), in partnership with the Committee of the Regions (CoR), the European Citizen Action Service (ECAS), Democracy International and the Initiative and Referendum Institute Europe  organised an "ECI Day" in Brussels on 9 April 2013. On the occasion of the ECI's first anniversary it was time to assess the first year of the ECI in practice, to hear the experience of organisers, to draw conclusions from the lessons learnt, to devise intermediate solutions to problems and to start preparing for the 2015 revision of the regulation.

Our assessment of ECI day:

The European Citizens’ Initiative (ECI) has been one year in practice, but neither EU politicians nor civil society organisations are happy with the instrument. Originally praised as the first tool of transnational direct democracy, “ECI Day” in Brussels on 9 April 2013 showed that the requirements of the ECI must change to be an influential and effective law-making instrument. It became apparent that European civil society organisations must live up to its responsibility and provide logistical and advisory support. Also, we should start campaigning for the revision of the EU legislation on the European Citizens’ Initiative, which is foreseen by April 2015.

This is the conclusion that we arrived at while travelling back from Brussels to our office in Cologne, Germany. The journey takes a good two hours by car if you are not stuck in a traffic jam, which happened to us somewhere in between Antwerp and Liège. So Ronald Pabst and Daniel Schily, our intern Andreas Müller and I had enough time to reflect on the statements and reports we had listened to for almost eight hours in the European Economic and the Social Committee. This is an advisory body of the EU institutions, which defines itself with the slogan “a bridge between Europe and organised civil society”.

The EESC had hosted the event in partnership with the European Action Service (ECAS), IRI Europe and Democracy International. Euronews was also present to shoot some pictures for the EU. According to the slogan of the EESC, the about 100 conference participants were the organised civil society that met “Europe” or more strictly speaking the EU, which was most prominently present with Maroš Šefčovič, EU Commissioner responsible for the ECI.

In his account of the ECI one year in practice, Commissioner Šefčovič called the ECI a “success”, yet not unqualified. He admitted that the EU Commission had underestimated the issue of data protection and the set-up of the software to register the one million required signatures online. He stressed that the European Commission should play no other role than providing the software, while the actual duty of campaigning for electronic signatures and giving advice had to be on the organisers themselves. In this context also, an independent contact point should exist. It should not be provided by the European Commission, which is the current situation following a last-minute move before the EU legislation of the ECI was adopted. 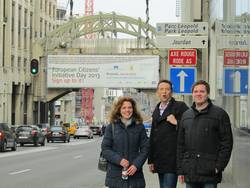 The issue of how much and what kind of support the EU institutions should deliver was the thread of “ECI Day” that led through the day-long debate. Daniel Schily of Democracy International pointed out the clear conflict of interest the European Commission had to face if it had to provide advice on an ECI demanding to revise legislation initiated by the EU’s executive body. In this context he proposed that European civil society organisations should unite to commonly provide a helpdesk for the ECI in addition to an EU-financed contact point. Daniel Schily’s pledge was contrasted by other voices who requested the stocking up of EU officials working on the ECI. Carsten Berg, Director of the ECI campaign, demanded from the European Economic and Social Committee a clearer and more active role.

Tear down the restrictive regulations of the ECI

It was also Carsten Berg who asked Carmen Dupont of Amnesty International why neither her organisation nor any other huge organisation such as Greenpeace had not yet started an ECI. Carmen Dupont replied that the barriers of the ECI were still far too high. To start with an ECI, there had to be the prospect of conducting an ECI successfully. However, the fact that after one year in operation still no ECI had fulfilled the requirements to be handed over to the European Commission as a law proposal was not any incentive at all.

So far out of the 14 successfully registered ECIs, only the initiative ‘Water is a human right’ has collected one million signatures. However, the initiative has not reached the criterion to gather a specific amount from at least seven countries in proportion to their population. In view of these high hurdles many ECI organisers admitted that they had launched an ECI merely for reasons of public relations  and networking, while lacking belief that they could actually reach the amount of one million signatures.

Towards binding ECIs and EU referenda

In the broader picture of making the ECI an effective instrument of direct democracy, Ronald Pabst of Democracy International stressed that an ECI would gain many more signatures if the ECI was legally binding and it was the first step towards a referendum. In his concluding remarks Gerald Häfner, Member of European Parliament and Chairperson of Democracy International, pointed into the same direction. Citizens had to be the co-legislators, citizens had to stand toe to toe with EU politicians. The right to a legally binding citizens’ initiative and the right to request a referendum on vital matters of EU importance were essential for a real democracy in the EU and a Europe of the citizens.

Deeds must now follow the words that were spoken at the “ECI Day” in Brussels. Deeds – and a campaign towards a better ECI – will be the proof of the pudding that European civil society is an independent and a strong player in the big world of the EU.