After weeks of protests in Kiev and other parts of the country, democratic norms could  finally become a reality for Ukrainians – Elections will be held in May this year.

The mass protests in Ukraine that have led to the fall of President Viktor Yanukovych started last November as a reaction to his refusal to sign an association agreement with the European Union (EU). Instead of enhancing Ukraine's relation with the EU and strengthening European integration, Yanukovych had opted for closer economic cooperation with Russia. As a consequence, several hundred thousand people gathered on Kiev's main square, the Maidan, and the marchers soon demanded the resignation of Yanukovych altogether. In the course of the protests, a violent turn could not be avoided leading to almost 80 persons being killed and many more being injured, mostly due to clashes with police forces and gunfire (Source 1).

Within the last few days, especially, a lot has happened: Viktor Yanukovych has fled Kiev after he had lost his majority in parliament, Yulia Tymoshenko has been released from jail, and an interim government has been established with Oleksander Turchynov as interim president. Most importantly, however, the Ukrainian parliament has decided that elections should be held on May 25th 2014. As a result of these political developments – with special regard to the upcoming elections - arises the question in how far they will have an impact on Ukrainian democracy and – in particular – on citizens' possibilities to get involved in the political process that have so far been neglected.

It is obvious that up to now, a wide range of democratic deficiencies exst in Ukraine. In this regard, corruption is one of the most, if not the most pressing problem of the country. According to Transparency International's Corruption Perceptions Index of 2013, Ukraine is the most corrupt country on the European continent (Source 2). 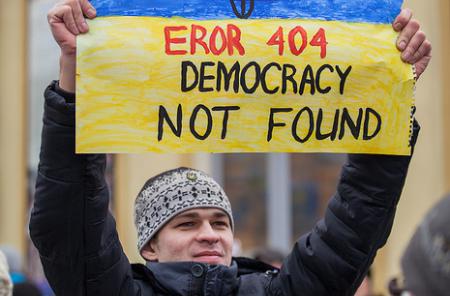 As a result of the extreme levels of corruption reigning in the country, an effective civil society has never had the chance to properly evolve. Also, effective and fair citizen participation has never been a reality. Hence, the only real democratic tool that Ukrainian citizens had at their disposal in the past was to vote in elections. In between elections, however, politics have been made in a quasi-authoritarian manner. The public was excluded from any type of decision-making-process and public debates on political decisions have been avoided by Ukraine's political elites (Source 3). In addition, resulting from this weak civil society, the Ukrainian ruling elites could more easily abuse their power. This was clearly exemplified by politcally-motivated imprisonements of opposition leaders or by the recent use of violence against anti-government protestors (Source 4).

Ukraine is now at a democratic crossroad. The euromaidan protests are a clear proof of the Ukranian citizens' wish to have a say in the political development of their own country – for example with regards to its relations with the European Union. Furthermore, the protests are an outcry against corruption and the absue of power as determinants of the fate of Ukraine and its citizens so far.

Now it is to be seen in how far citizens' wish will be fulfilled to be included in the political process of a country that is to be fully freed from corruption. The outcome of the elections in May will be a first indicator of Ukraine's democratic future.

Photo in the text (Source here)