A busy summer for the European Citizens' Initiative

A busy summer for the European Citizens' Initiative

It’s been a long journey for the revision of the European Citizens’ Initiative (ECI) over the last year. The ECI reform will probably come to a close this year, but not before a busy summer of open letters, forget-me-nots, social media campaigns, and growing alliances.

This summer proved to be a busy one for the ECI, the world’s only tool of transnational participatory democracy, which is undergoing its first revision process in its six years of existence. Arguably the greatest drawback of the ECI in its current form is that successful initiatives don’t see enough political impact. While the European Commission is legally obliged to respond to a successful ECI, it is not obliged to act on it. This won’t change anytime soon – last September, the European Commission rejected our demand to make its response to successful ECIs more binding in the its proposal for a revised ECI. However, the Constitutional Affairs Committee (AFCO) of the European Parliament (EP) was preparing its own legislative report on the ECI and still had much potential to significantly increase the ECI's political impact by increasing the EP’s role.

With all eyes on AFCO, Democracy International and our partner The ECI Campaign sent an open letter ahead of the crucial June 20 vote to all Members of European Parliament (MEPs) asking that they oblige themselves to debate and vote in plenary on successful ECIs. We distributed the letter co-signed by 70 civil society organisations and ECIs, including all 5 successful ECIs, along with forget-me-not flowers at the European Parliament in Brussels, urging MEPs not to forget about the 9 million citizens who have signed an ECI. 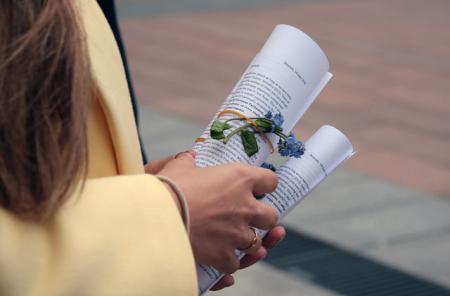 At the June 20th vote, the AFCO Committee ignored our collective call to the EP to take greater ownership and responsibility of the ECI. The vote not only undermined the ECI itself in preventing it from becoming more politically influential, but it also further undermined confidence among civil society and citizens that the EU is responsive to their concerns.

But, it wasn’t the last opportunity for united civil society to demand a strong ECI reform. We launched a 2nd open letter requesting the EP not to adopt the report in its current form at the plenary session in July, where a majority would be required. This time, nearly 90 civil society organisations supported the follow-up open letter and backed our social media campaign #EPForgetUsNot, helping us generate more public pressure and support for our campaign.

As July 5th, vote day in the EP plenary, approached, the EP decided to take the report forward, despite the fact that it did not contain any concrete measure to improve the follow-up on successful ECIs. However, our campaign did not fail. The EP’s ECI Rapporteur announced just before the vote that he will initiate an amendment of the EP’s own Rules of Procedure to hold plenary debates on successful ECIs. The promise was kept, and the amendment procedure began the following week. The vote on the proposed amendments, which include a debate in plenary on successful ECIs and the possiblity to wind the debate with a resolution, is expected to take place on October 10th. Thanks to the strong united civil society alliance and lobbying efforts, our #EPForgetUsNot campaign produced a step in the right direction for the ECI. The EP for the first time is structurally taking more ownership of the ECI by means of a debate on every successful ECI, which will ultimately increase the political influence of the ECI – our first and foremost demand.

After the EP plenary session in July, the European Council, one of the three main institutions of the EU, represented by Member States, also made its position known on the ECI’s revision. It is in line with the Commission’s proposal but takes a big step back on two issues: allowing 16 and 17 year-olds to sign initiatives and limiting the choice of ECI organisers to use an individual online collection system as an alternative to the central online collection system already offered by the Commission. Allowing young Europeans to sign an ECI would offer 10 million more EU citizens the right to engage in participatory democracy – a significant number considering that the EU, due to Brexit, is on track to lose about 60 million citizens and potential ECI supporters without any plans to lower the 1 million signature threshold. Taking away the option of ECI organisers and campaigners, often IT experts, to run their individual online collection system is an even further step back from the current ECI regulation and hinders the free choice of ECI organisers to choose the campaigning and collection tools of their preference. No steps will be taken to improve the Commission’s outdated collection system. Allowing individual collection systems encourages healthy competition between the various systems so that the quality of the service continuously improves.

It’s not over just yet for our fight for a strong ECI revision. Trilogues between the European Commission, Parliament and Council are expected to begin this autumn. And finally, the new regulation on the ECI is expected to come into effect in 2020. Until then, and beyond 2020, we will continue to campaign for a stronger ECI that is more impactful, more user-friendly, and more well-known to European citizens.