The 2019 Grand Débat National in France: A Participatory Experiment with Limited Legitimacy

The 2019 Grand Débat National in France: A Participatory Experiment with Limited Legitimacy

Everyone remembers the Yellow Vests movement. Few remember the Grand Débat National. Yet, together they make up this singular political moment, between October 2018 and March 2019, France went through. If holding citizens’ consultations is by no means novel, what made the French Grand Débat National venture different to other national experimentations of participatory democracy was that it was done to an (almost) unprecedented scale, to quell an enraged public, at record-speed and it mobilized different tools for citizens’ participation. How was the Grand Débat National organised? Who participated? How deliberative was it? In other words: how much of a satisfactory answer was it to the Yellow Vests’ crisis of confidence?

Born unexpectedly in reaction to a new fuel tax, the Yellow Vests contestation rapidly developed from a social to a political crisis with crystal-clear revendications. Indeed, it did not take long for socio-economic claims – improved living standards, tax reduction, increase of the minimum wage – to develop into constitutional demands for political accountability and direct democracy with the Citizens’ Initiative Referendum (‘RIC’). In view of the polarization of the French public opinion on those revendications, the French President E. Macron officially launched mid-January 2019 a Grand Débat National (GDN) to “transform, with [citizens], angers into solutions”[1]. This two-month-long nation-wide debate was designed as a participatory democratic exercise open to all citizens willing to engage on one or more of the four themes selected by the French government: ‘Democracy and Citizenship’, ‘Fiscality and Public Spending’, ‘Ecological Transition’ and ’Organisation of the State and Public Services’.

Yet, if the scope of the Grand Débat National was clear, its exact aim was not. Words like consultation, participation and deliberation were often used inter-changeably by government officials and local organisers and no promises were made on its future outcomes. This vagueness translated, despite a welcome plurality of instruments for citizens’ participation, in an impoverishment of the debate’s inclusivity and deliberative features. The Grand Débat National was a case in point of many participatory democracy experimentations shortcomings: failure to establish a follow-up mechanism and negligence in the elaboration of citizens’ participation.

If this raises serious questions about the legitimacy of a democratic venture that should not be oversold, there are nonetheless some important lessons to be drawn from the Grand Débat National. The current Citizens’ Convention for Climate, for example, builds on some of these lessons. Thus, this research note aims to provide a non-French and non-academic audience with an independent account of the Grand Débat National: what was its scope and scale, how was it organised, who took part, what were the quality and deliberative features of the debates? The purpose for sharing this experience is to strengthen transnational knowledge of good and bad practices of citizens’ participatory mechanisms for future initiatives.

To do so, it builds on the preliminary findings of a participatory research project – l’Observatoire des Débats –  gathering independent actors from civil society and academia. The aim was to provide the Grand Débat National with a politically neutral and scientifically-sound ‘mirror’ of debates. To this day, while conclusions published by the French government build on aggregated heterogenous reports, the qualitative and quantitative data collected by l’Observatoire are the only data available informing us about the sociology of the Grand Débat National public and the discursive processes through which proposals were formulated[2]. 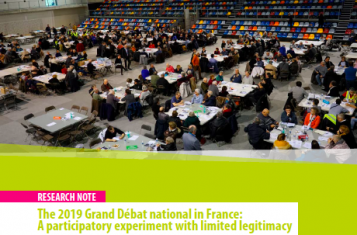 The 2019 Grand Débat National in France: A Participatory Experiment with Limited Legitimacy - Read the full report here: Everyone remembers the...
read more