Over 30,000 lobbyists are said to roam Brussels, meeting unchecked with Members of European Parliament (MEPs) behind closed doors. With no mandatory lobby register in the EU, financial and corporate lobbyists have unregulated access to influence EU decision-makers. For years, Democracy International has advocated for a stricter lobby transparency rules so that there is no question about whose interests representatives truly represent.

European citizens deserve a right to know who is influencing EU policy and what interests are being represented at EU level. The best existing scheme for this is EU Transparency Register, which has been jointly established in 2011 by the European Commission and Parliament to answer citizens' concerns about the independence of EU institutions. The online public database invites lobbyists and special interest groups to identify themselves, their aims and their budgets.

However, the weakness in the register lies in its non-binding nature across EU institutions. Thanks to measures taken by the Juncker Commission, lobby meetings with Commissioners are restricted to only those registered, but the Parliament has been using the register on a purely voluntary basis, and the Council does not use it at all. In order to increase transparency and openness in the EU decision-making process, the already existing register must be strengthened. Democracy International demands a mandatory lobby register across institutions so that only registered special interest groups may meet with EU politicians. 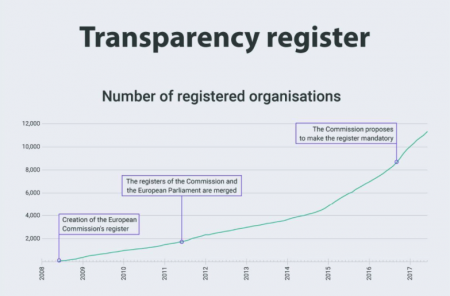 In January 2019, the European Parliament voted for a historic amendment that would have obliged MEPs in special positions to publicly disclose meetings with lobbyists for the first time ever. The amendment was passed by a slight majority, making it the most important lobbying transparency vote to pass in the EU so far. Thanks to the support of our community, Democracy International along with campaign partner Lobby Control ran a successful campaign for more transparency ahead of the vote.

These steps are a welcome milestone in the fight for more lobby transparency, and the measures taken by the Commission have already raised the bar when it comes to stricter lobbying rules. These measures include banning senior Commission representatives from holding meetings with unregistered lobbyists and introducing a waiting period of 12-18 months for politicians who retire from their public office and take up an industry job.

A new and improved EU agreement for the Transparency Register is critical for European democracy, but only if steps are taken by all three EU institutions to move towards a mandatory register.

Read here the open letter sent by ALTER-EU, together with Democracy International and over 100 NGOs, to the Commission in the first year of its mandate in 2015 demanding a legally binding lobby register.

On 25 August 2015, Democracy International handed over to Sven Giegold, Member of the European Parliament, people’s suggestions for how to end...
read more
Email your MEPs
*/ */ This campaign has ended.  Thank you for taking part! Thanks to your support, over 61,663 emails were sent to Members of European Parliament...
read more
Over 100 NGOs call for lobby transparency