to help our democracy friends in South Tyrol!

The “Initiative für Mehr Demokratie” (Initiative for More Democracy) in South Tyrol ran a successful campaign for citizen-friendly direct democracy and against the South Tyrolan’s People Party (SVP) that was intending to introduce flawed rules of citizen participation. Read the feature story that presents to you Stephan Lausch, the main person behind the campaign.

“Everybody, please help!” or “Most important facts about the referendum on 9 February”, these are the appealing subjects of e-mails that reached us  by Stephan Lausch over the past few weeks. His fierce opponent is the ruling South Tyrolan's People Party (SVP). This is our feature of a man and his fellow people who are currently fighting tremendously for their direct democracy rights in Italy's Alpine province.

South Tyrol is a region of Italy, and therefore it is pretty surprising to speak to Stephan Lausch in High German. One would expect an Italian accent, but Stephan's only shows a light Southern twang. This is because the majority of all inhabitants of South Tyrol speak German as their mother tongue, while about 25 per cent grew up with Italian. And a small minority of about four per cent are native speakers of Ladin, a Rhaeto-Romance language. 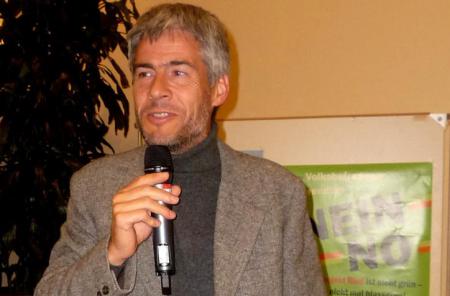 Stephan Lausch is the coordinator of the “Initiative für Mehr Demokratie” (Initiative for More Democracy) in South Tyrol. Right now he and his mates are running the final spurt of a battle. This upcoming Sunday, 9 February 2014, a decisive referendum will be held on the future of direct democracy in the Alpine region. The struggle began in 1995, almost 20 years ago. Then Stephan Lausch and three of his friends founded the Initiative for More Democracy with the aim of realising citizen-friendly direct democracy in South Tyrol.

The starting point for this endeavour closely goes in hand with South Tyrol’s overall history: since 1972 South Tyrol is an autonomous province of Italy. At the end of World War I Italy cashed in South Tyrol, along with neibhbouring Trentino as its reward for joining the states of the Alliance. After WWI, the victorious forces made South Tyrol a part of Italy despite of the fact that German is mostly spoken there. This national conflict was also present in South Tyrol during World War II and later on. From 1956 until 1968 a series of bombings scattered the region by militants fighting for South Tyrol’s self-determination. Eventually, in 1972 South Tyrol was granted territorial autonomy within Italy.

This historical background explains the high amount of German native speakers in South Tyrol, Stephan Lausch is one of them. Also this historical context explains why democracy activists in South Tyrol in theory are better off than their fellow activists in most other parts of Italy. Unlike the ordinary Italian regions, since 2001 the autonomy statute of South Tyrol provides this autonomous province with the power to introduce all instruments of direct democracy. Yet in practice, the ruling South Tyrolean People's Party did not go further than adopting some flawed regulations on direct democracy. That is why democracy activists in South Tyrol have to fight a long political struggle. The South Tyrolan’s People Party (SVP) is their fierce opponent. 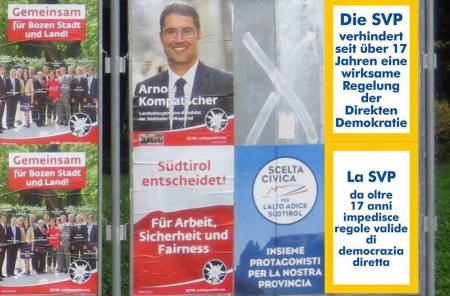 The SVP was founded after World War II in order to originally represent the German speaking population. The SVP has been in power ever since. According to Stephan Lausch, the party’s influence is tremendous, concentrating the interests of the well-off and economically powerful. In this view it is not surprising that the SVP tries to put high barriers to the existing instruments of direct democracy. Those hinder people from pushing through law proposals that can lead to a fairer, more equal and environmentally sustainable society.

Tripping up the SVP

This also is the case in the upcoming referendum scheduled for 9 February 2014. Ironically, the issue of the referendum is the very last provincial law on citizen participation in South Tyrol initiated and approved by the SVP. If realised it puts the current state of direct democracy in South Tyrol in jeopardy as it foresees far too high hurdles for the procedure, the amount of required signatures and some other serious obstacles. The only positive achievement of this SVP-law is the fact that finally the turnout quorum of 40% has been definitley canceled.

These are the conclusions Andreas Gross, a political scientist and member of the Swiss parliament (“Nationalrat”), arrives at in an expert opinion assessing the quality of direct democracy as legally proposed by the SVP. Following his findings it is appalling that the time period for signature collection and the required amount of signatures are “absurdly high”. Overall there would be far too many opportunities to stop and to put on hold citizens’ initiatives, Andi Gross finds (p. 14, the document is available for download below). 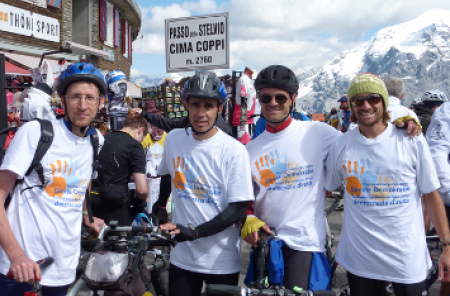 Campaign action of the Initative to collect signatures, Sept. 2013

To prevent the SVP’s legislation from entering into force, Stephan Lausch and his democracy activists have tripped up the SVP by making use of the facultative (confirmative) referendum that can be applied in South Tyrol. This instrument allows to stop a law already adopted by the local parliament to enter in force. They collected 17.763 signatures to enforce a referendum. This one is now due to be held on 9 February 2014. It means the last chance to stop the SVP’s attempt to suffocate direct democracy in the Alpine province by putting up too high restrictions and barriers.

In this context it can be easily understood why Stephan Lausch is difficult to reach in his office in Bozen these days. He is out campaigning with about 100 volunteers, most of them members of the “Initiative for More Democracy”. They are distributing flyers, hanging up posters calling upon his fellow people to vote No in the upcoming referendum. The slogan on the poster says it all: “Weil wir mitentscheiden wollen, Nein zum SVP-Gesetz” (As we want to have a say, no the SVP- Proposal).

Let us cross our fingers tight that Stephan Lausch will be the victorious David in this battle.

Update, 10 February 2014: In the referendum on 9 Feburary 2014, 65,1 per cent of all voters opted against the legislation, while it was approved by 34,9 per cent. The turnout was high at 26,4 per cent. We cordially congratulate Stephan Lausch and the activists of the "Initiative for More Democracy in South Tyrol". Congratulations!!

Donate to help our democracy friends in South Tyrol

This article is available here in German thanks to a translation by our German partner organisation Mehr Demokratie.

Read our press release on the referendum in South Tyrol 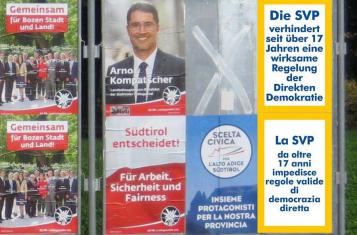 The citizens of South Tyrol want more effective and citizen-friendly rules of direct democracy. This is the result of a referendum held yesterday in...
Plus