Here you find the detailed programme of the Global Forum

More than 400 people from all over the world participated in the Global Forum on Modern Direct Democracy that took place from 14 to 17 May 2015 in Tunis, Tunisia. At the end of the world's biggest conference on direct and participatory democracy, the participants commonly declare...

"Tunisia is in transition.

So is direct democracy around the world.

We are Tunisians. We are Africans. We are Europeans. We are Asians. We are from the Americas. We come from all kinds of communities, from every corner of the globe, and from all walks of life. Among us are scholars, trade unionists, journalists, activists, campaign organizers, philanthropists, elected officials, election administrators, NGO leaders, lawyers, businesspeople, farmers, students, citizens, engineers, and the unemployed.

We have met for four days at the University of Carthage’s INAT campus to discuss direct democracy, participation and decentralization at a free and open forum in Tunis, Tunisia, to which the entire world was invited. Those of us who came from other places were impressed to learn more about the successes of the revolution and the progress Tunisia has made. We also were reminded that Tunisians have a very long way to go on their journey to a better democracy.

But don’t we all?

We see this shared journey as taking our societies not only from dictatorship to democracy but also from democracy to true participatory democracy. We know that representative democracy, while essential, is not enough by itself. We are in transition from low-turnout elections to robust new forms of participation that give us more power, but also ask more of us.

Participation requires more than words in a constitution, or provisions in a law. It requires a supportive infrastructure – freedom and transparency (especially to counter corruption) and secure spaces (including online) and independent citizen media and strong social movements and economic resources and civil society organizations -- that allow people to connect to each other, and to make their voices heard. We are encouraged by the articles on participation in the Tunisian constitution and by the Arab World’s first participatory budgeting experiments in Tunisian cities, but there is much more to be done.

Participation means that economic decisions, whether they involve the world’s largest trade agreements or small city trash services, are based on democracy, not money. Participation and democracy demand equality for all and leadership from all, especially for and from those who have been excluded in the past—most urgently the young and women. It is long past time for women to rule in democracy.

Let’s also be clear: We wholeheartedly reject the idea that democracy is a garment that only fits some people, or some societies, or some faiths. Democracy is a shirt that can stretch to fit us all.

Direct democracy should have no single home. We hope and pray for the day when democracy resides wherever people form communities. Democracy must be the right and responsibility of every individual, whoever you are, whatever your economic or social status."

We offer this statement, the Tunis Declaration, on the 17th day of May, 2015. We welcome the suggestions, corrections, and contributions of the world.

You find photos of the Global Forum 2015 in our Flickr channel. 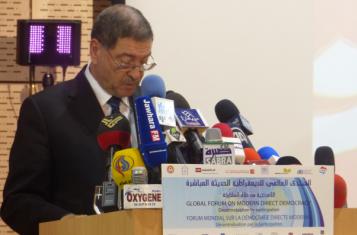 On 14 May 2015 the Prime Minister of Tunisia, Habib Essid, officially launched the Global Forum on Modern Direct Democracy in the premises of the...
Plus
"Direct democracy has its place in Tunisia" 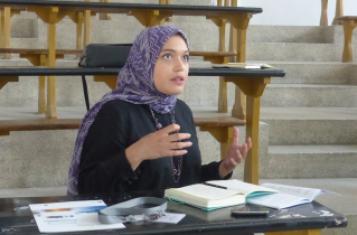 26-year-old Ghofran Ounissi is one of the participants of the Global Forum. Born in Tunisia, she grew up in Paris from the age of three years onwards...
Plus
Democracy as a balancing act 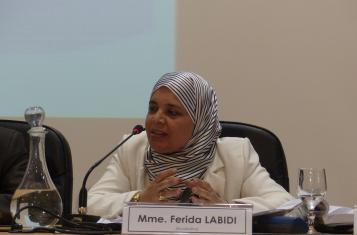 Political decentralisation was one of the most important achievements of the revolution in Tunisia that launched the Arab Spring. The question of how...
Plus