the Global Forum via the video streaming by swissinfo.ch

in the Global Forum via the social media wall by swissinfo.ch

Here you find the detailed programme of the Global Forum

On 14 May 2015 the Prime Minister of Tunisia, Habib Essid, officially launched the Global Forum on Modern Direct Democracy taking place in the premises of the University of Carthage in Tunis, Tunisia. Attended by more than 400 people from all parts of the globe, the four-day event is the biggest conference on direct and participatory democracy in the world, bringing together democracy scholars, politicians and activists. The theme of the conference is "Decentralisation by participation". Democracy International belongs to the main organisers.

Bruno Kaufmann, Co-President of the Global Forum and Board Member of Democracy International, welcomed the participants from as diverse countries as Sudan, South Korea, India or Argentinia, including many Tunisian participants, of course. Kaufmann pointed out that people's struggle for democracy was a well known feature all over the world. People had come togehter in Tunis to share their stories and find answers to the questions how to make democracy more democratic in all parts of the world. You can read Bruno Kaufmann's full speech here

The Prime Minister of Tunisia, Habib Essid then officially launched the Global Forum. In his speech Mr Essid pointed out that Tunisia has been struggling for democracy throughout the past four years and was still in turmoil. He praised the role of women during and after the revolution - their activism was essential to establish democracy and equality of men and women in the country. Also, Essid referred to Article 139 of the Tunisian constitution, which stipulates that local bodies must adopt democracy in order to let citizens participate in local governance. TEssid expressed his hope that the Tunis Declaration (to be commonly adopted by all participants at the end of the Global Forum) will pave the way for effective participation in Tunisia and in all parts of the world!

In the following parts of the conference, participants learned how Tunisian civil society activists and politicians of the new, post-revolutionary parties drafted the Tunisian Constitution in a three-year-long process. The Tunsian constitution was finally adopted on 26 January 2014 and contains several articles with regards to democracy and citizens' participation. 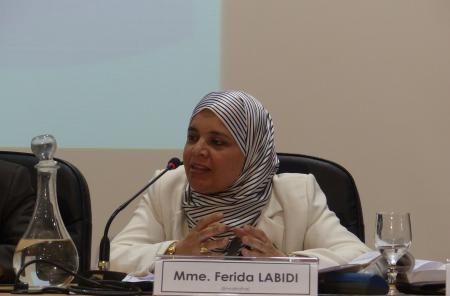 With regards to the central theme of the Global Forum 2015, "democratisation through participation", Chapter Seven of the Tunsian constitution is crucial enshrining democratic forms of local government, cited several times during the conference. The articles stipulate that local authorities are to enforce participatory democracy and free elections, good governance and are to combat corruption. Link to the Tunisian Constitution here.

In the next three days of the conference, it is the task of the participants to elaborate concepts for putting into practice the norms of the constitution. In post-revolutionary Tunisia,

Here you can watch the first day of the conference:

Text and Photos by Cora Pfafferott