Democracy as a balancing act

Democracy as a balancing act

Political decentralisation was one of the most important achievements of the revolution in Tunisia that launched the Arab Spring. The question of how this goal can be accomplished was debated at the recent Global Forum on Modern Direct Democracy in Tunis, summarizes Renat Künzi.

The hundreds of participants from nearly 40 countries, including high-ranking Tunisian politicians, called for vigilance towards the networks of the old regime, which are regrouping.

Together with lawmakers, party representatives, trade unions and members of civil society, intellectuals, democracy activists and bloggers were in agreement in Tunis that the path they have set out on will be long, rocky and marked by setbacks. 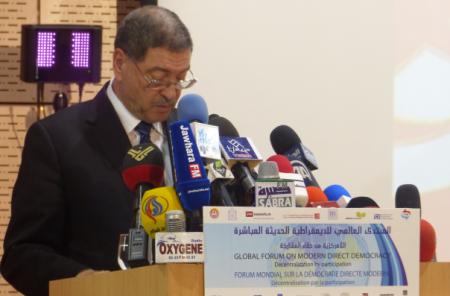 The opening session, also attended by high-ranking officials, showed how untested Tunisia’s fledgling democracy still is. It brought together Mokhtar Hammami of the interior ministry, which under the ousted Ben Ali was the feared arm of the dictatorship, and representatives of the most important parties.

The party representatives showered Hammami with accusations that he was stalling reforms, particularly planned local elections. Under attack, he announced that his ministry had drafted four legislative packages to create the necessary legal basis for decentralisation. “That’s not your job, that’s our task!” protested the lawmakers, to which Hammami countered that the lower house of parliament had not put forward any relevant proposals.

The situation reflects the contradiction at the root of the whole transformation process in Tunisian society: Loud calls for rights, freedom and reforms, all immediately. But the awareness that democracy also means a responsibility to act is not yet established. The passive, fatalistic reflex that “Tunis” should sort it out is still omnipresent.

In another way, the debate was exemplary. Despite the exchanges of blows, the protagonists were worthy models of democracy in the respect they showed to their political opponents. 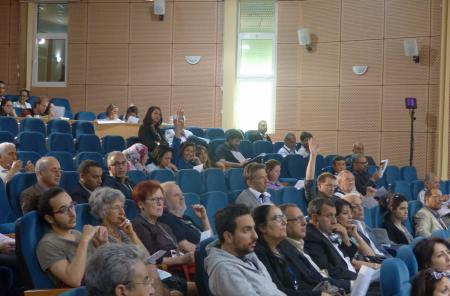 Mehdi Ben Mimoun, a professor of agronomy and the local organizer of the forum, pointed out one aspect. “Samir Ettaieb from the strictly anti-religious Massar Party used half of his speech to thank his colleague Imed Hammami from the moderate Islamist Ennahdha and to sing his praises. A eulogy like this for a rival from the diametrically opposite side would have been unthinkable two years ago,” Mimoun said.

These small, symbolically significant signs of a new political and intellectual culture of democracy face, however, enormous challenges and threats, which participants alluded to again and again. 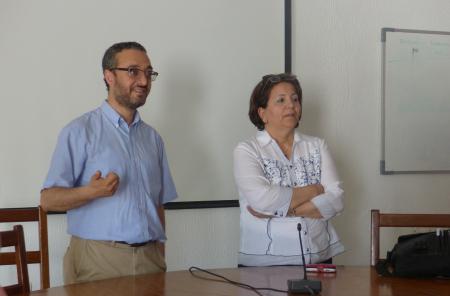 First, the economy. Its state is catastrophic. “The image abroad of a successful revolution that must be supported stands in stark contrast to the Tunisian reality,” said Salem Labiadh. The sociologist and author, who was education minister in 2013 and 2014, even compared Tunisia to Greece in terms of debt. Since 2011, the debt burden has increased by more than 20 billion dinar (about CHF10 billion). In 2015 it will swell by another 7 billion dinar.

Second, the old networks of profiteers and favourites who participated in Ben Ali’s theft of billions from the people. The security forces and financial and economic elites count among them. “They are punishing the revolution and the new state with a block on investment that has now lasted years,” said Mehdi Mabrouk, an independent politician who was culture minister from 2011 until 2013.

Since the October 2014 election, these forces of the old regime have been energetically pulling strings to get back into positions of power, and are doing so publicly. “They have almost 50% of the seats in parliament again. That gives me a weak feeling in my stomach, and yes, I can’t rule out a counter-revolution,” Mabrouk said.

He is not completely guiltless himself, he concedes. The government to which he belonged made the mistake of failing to take compromised figures out of circulation by filing criminal charges against them.

Role of the media

Third, the media. The role it plays was described as deplorable. This is no fourth estate which keeps watch to safeguard what has already been achieved and promote future developments and transparency. Instead it is abused by “les anciens,” the compromised members of the former regime. In concrete terms, this means public ridicule of their political opponents and manipulation. “Just as it was under Ben Ali,” as the young spokeswoman of an NGO that promotes civil society said with frustration. 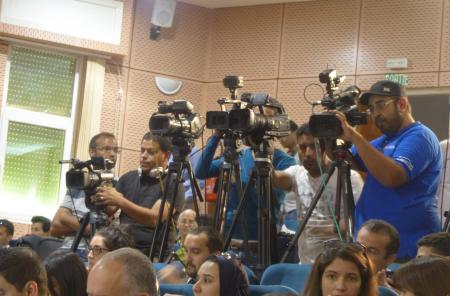 “We now have a diverse media landscape. But the central political questions are not even addressed anymore,” complained Lotfi Hajji, the head of the Tunis desk of the TV channel Al-Jazeera. “Instead of building trust in the new institutions, they are creating a huge rift between the media and the people. More than 300 attacks by citizens on journalists in the past year bear testimony to that,” the journalist said.

First-hand information from players at the Tunis democracy summit, many of whom occupied or still occupy the highest positions, shed darker hues on the prettified western picture of a successful civic revolution. Referring to the elderly President Beji Caid Essebsi, Salem Labiadh, the sensitive intellectual and author, said: “The revolution is like a young woman who has been forced to marry an 80-year-old man. The government no longer represents the revolution and the heroes who gave their lives for it.”

This piece was written by Renat Künzi from our media partner swissinfo.ch, where the article was published first – and where it is available also. You find the original piece here.