From 6 to 7th March 2014 the European People’s Party (EPP), the conservative party family of the EU, held a Congress in Dublin to discuss their European agenda and to elect the top candidate for the next European elections.

Armin Steuernagel, in charge of leading Democracy International’s campaign “Democratic Europe Now!”, was present at the conference to find out how Europe’s conservatives think about more democracy in Europe and a new EU convention. At the event he also promoted Democracy International’s idea of a democratic convention as an inclusive forum at which the big decisions about the European Union’s future are openly debated between politicians, civil society and citizens.

Armin shares with us his thoughts and impressions from the political party event.

Most of the Heads of State spoke about the European crisis, which they managed so well and which is now almost over. What was often said is "Europe is not the problem but the solution" - they all argued in a very pro-european way. Everyone of them emphasized that we all should "be proud of Europe". However, what was demanded also by almost every Head of State, is a more decentralized Europe in areas that do not need european regulation", or as they say "more Europe in areas that need to be regulated European-wide and more decentralization in areas." All mentioned that the upcoming EU elections in May 2014 will be particularly difficult because of the stronger anti-European parties. At the same time, they were all confident that they would "win" the elections.

In general, the politicians did not talk a lot about "more democracy" - they repeated again and again that "more competitiveness" is needed, that we have to help small and medium enterprises in order to overcome the crisis.

The Finish Premier Minister was perhaps one of the persons who criticized the current situation at most. He said that we should try to understand the eurosceptics as there was a reason why they are sceptic.

Merkel was one of the few people who called for more democracy in Europe, but also for economic competitiveness.
She said well-sounding sentences such as "We want to realise a European Union that thinks of people first" or "In essence we are dealing with this key question: How do me manage that the economy serves again the people?” 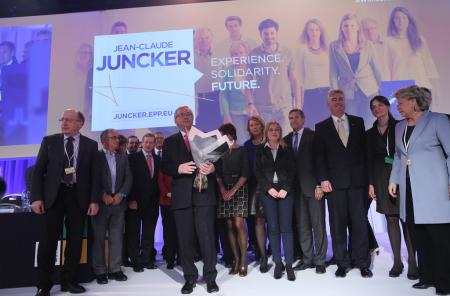 I talked to several important people during the congress. The most important ones are these:

Austrian Vice-Premier Minister, Michael Spindelegger:
He shares the urgent need for a new convention. At the moment he does not see any majority in the EU council, but he said that Austria would ask (also formally) for a new convention as soon as the new European commission is installed (to happen at the end of the year). He only thinks that it does not make sense to formally ask for a convention when it is already clear that no majority will support it. I told him that this is not quite true, since a rejection of the council would raise awareness and give us brilliant possibilities to campaign.

Antonis Samaras, Prime Minister of Greece:
On a personal level, he was very kind and paid a lot of attention to me. He thinks that a new convention is needed as soon as the last small things are fixed which need to be fixed. I asked him if he would support an initiative from Austria for a new convention if they would bring in a proposal at the end of this year. He said: definitely! He respects his Austrian Colleague a lot.

Viviane Redding, EU Comissioner:
She told me that of course reforms are needed and a convention as well – However, she thinks that there will not be a real discussion about this before the beginning of 2015. As a reason she sees that a new European Commission won't properly start working before December 2014. And before then in her eyes nothing essential is due to happen. She was actually very happy that I was interested in the topic and explained to me things about the last convention, the EU referendum in France in 2005 an so on. On the question if she thinks we should have a pan-European referendum she answered: “Well, this is not up to her to decide, the question will be if enough Heads of State will be willing to take that step”.

Jean Claude Juncker (former Prime Minister of Luxembourg, former Euro-Group Chef, now top candidate of the European People’s Party and now running for Presidency of the EU Commission):
He reacted a bit strange when I asked him about a new convention. He said "Well, before answering to such a delicate question I rather want to think first". And later he said something like this: It is not yet sure whether we really need big treaty changes. There are - particularly French political actors - that do not see the necessity of a convention. Perhaps, he said, there are only some small changes necessary which could be done without a convention. I got the impression that democracy is not at all an issue for him.

David McAllister (top candidate put up by the German conservative party):
He said that he does not want to say anything about the question when and if a convention is needed. He said the question still needs to be discussed internally while there are some competing opinions internally.

Irishman Bono, front singer of the band U2, was also present and gave a moving speech. He said that Europe has to be more than a legal construction, Europe needs more than treaties, it needs feelings. And it only will get feelings if it acts in the interest of the citizens. He pointed out that we need to find ways how to change capitalism since it has become a beast. Furthermore, he asked the Heads of State and politicians to behave in Europe like you behave in families. You help each other not in your own interest but because you care for the other. Europeans should care for each other and not act in their mere self-interest.

By the way: Bono got the most attention of all.