On first April more than 50 democracy activists from as diverse countries as India, USA and Bulgaria came together in Vienna to join the Danube Democracy Rally. Our aim is to learn from each other, to deepen our knowledge on direct democracy and also to have fun together while travelling nine days along the Danube through Vienna, Bratislava and Budapest. Today, 3 April, we will be travelling from Vienna to our next stop Bratislava. Here is a recap of the most important events of our stay in Vienna. 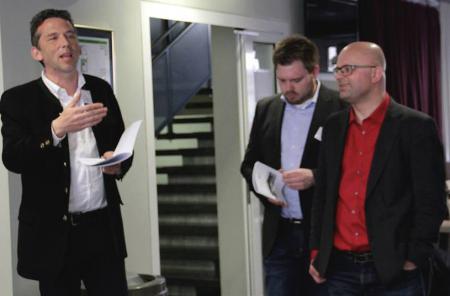 We welcome the about 50 participants at noon. Daniel Schily speaks on behalf of Democracy International, Erwin Leitner on behalf of mehr demokratie! Austria we are partnering with to organise our stay in the Austrian capital. Then we all go on a trip to see the beautiful sights of Vienna.

In the evening we listen to a panel discussion on "Models of direct democracy in European cities - Inspiration for Austria?". Andreas Gross explains about direct democracy in Zürich, Manfred Brandt of Mehr Demokratie Germany speaks about the Hanseatic city Hamburg. Erwin Mayer of mehr demokratie! Austria makes the case for Vienna: Unlike Züruch and Hamburg, Vienna does not have any binding instruments of direct democracy. Too often, politicians make use of a consultative vote, leaving them the power whether to accept the decision by the people or not. For us it is clear: this has to change! 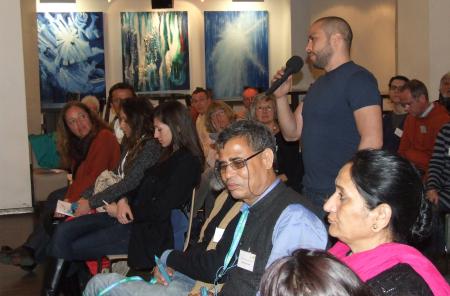 We visit the UNO City in Vienna. At first we are a bit surprised about the high security in place around the building but we mange to get inside. Again, there is a guided tour. We learn that about 4500 people work for the United Nations in Vienna, mostly on pre-empting the use of nuclear energy and fighting drug trafficking. 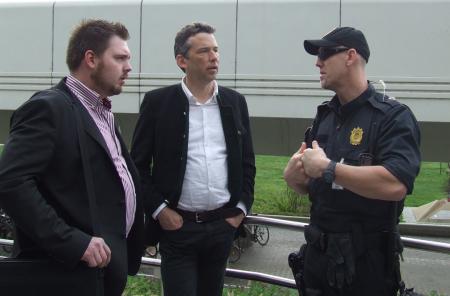 After the tour we listen to presentations on the direct democracy at global level and the need for a world parliamentary assembly. Alfred de Zayas, UN independent expert on the promotion of a democratic and equitable international order and Andreas Bummel, Director of the Committee for a democratic UN and Secretary General of the campaign for a UN parliamentary assembly make the presentations. 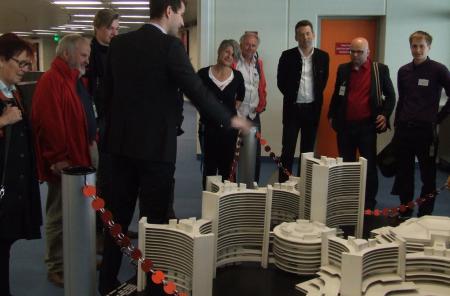 In the evening we discuss the best model of direct democracy to be implemented at national level in Austria. Claudine Nierth of of Mehr Demokratie e.V. introduces about 60 participants into the idea and practice of direct democracy in general. Then, Michael Efler explains the model of direct democracy in Germany, elaborated by our German partner organisation Mehr Demokratie e.V. There are three steps: the citizens' initiative, the facultative referendum and the obligatory referendum. He presents in detail the procedure and conditions. His conclusion: Direct Democracy works at national level when the process and rules are well designed. These presentations are followed by a discussion between Austrian journalists and the audience. 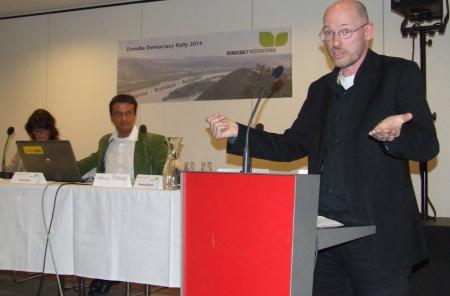 In the morning together with mehr demokratie! Austria we had organised a referendum on TTIP, the Transatlantic Trade and Investment Partnership, in front of the Austrian parliament in Vienna. We distributed an information brochure with pros and cons on the planned free trade agreement between the US and EU and invited passers-by to cast their vote. The Austrian first channel ORF came along to film our political action and interviewed Erwin Mayer, board member of Democracy International. 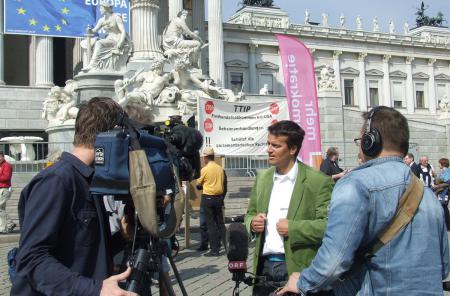 At 3.00 pm we head towards Bratislava. The sun is shining. The participants are happy - and we the team of the Danube Democracy Rallly, is happy. More to come.

Find out about our ongoing, most up-to-date activities on our Facebook-Page at www.facebook.com/di.democracyinternational

Watch our video about our first stop in Vienna here